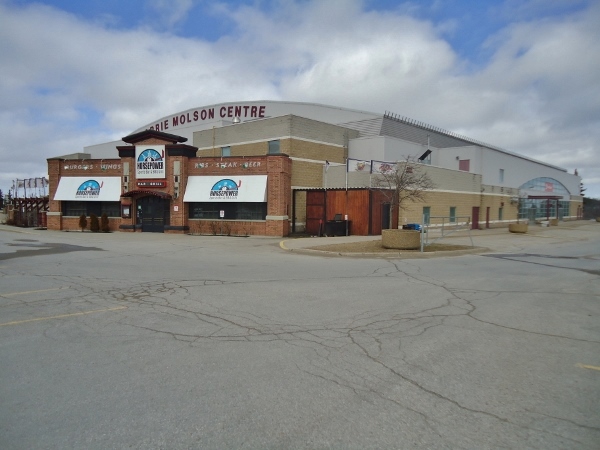 Celebrating their 20th season as an OHL club, the Barrie Colts have been providing fans in Barrie an entertaining brand of hockey at their home, the Barrie Molson Centre, for quite a while now.  Built into a small hill on the south edge of town, along the main drag and intermixed with eateries and strip malls, the Barrie Molson Centre is typical of a mid-90's era arena, having opened in late 1995.  The building is surrounded by parking lots, and features a brick facade on the main level, with tan metal siding along the upper reaches of the exterior.  A red raised-letter sign notates the facility name, and there is a restaurant known as the Horsepower Grille on the end of the arena.  Although the Molson factory in Barrie closed quite some time ago the city still has quite a connection to the Canadian brewery.  The arching roof and silhouette of the building clearly identify the structure as an arena.  There is nothing particularly unique or noteworthy about the exterior or design of the Barrie Molson Centre, but is is a well kept place that is small enough to have an intimate feel to it, yet with the stylings and design work of a larger arena.  The Colts take their horse related name and theme from the nearby horse racing facility which is located a few miles to the south.  The fan support in Barrie is quite good as while waiting in line to buy a ticket at around 3pm on gameday the couple in front of me in line was sold the last 2 seats together in the entire building.  Interest was high despite this being a rather meaningless game on the final weekend of the regular season.  A ticket up high in the corner ran $20.50.

Once you enter the arena you find yourself on the main concourse which runs behind the seating area.  The concourse has the usual concessions, and is rather stark, but serves its purpose.  In some spots there are windows which look out from the concourse into the parking lot.  One this late March evening fans could see the snow flying outside while walking the concourse.  There is a simple, rather small team store on the corner of the concourse, and the concourse hallways essentially dead-end on the restaurant end of the arena, although you can walk through the restaurant to get around if needed.  The seating bowl is made up of 18 rows of steeply pitched maroon plastic seats.  Most of the seating is on the sides of the arena with the restaurant and club seats being on one end, and the other end also having quite a few less rows than the sides.  Sight lines are excellent, and the open roof trusses and ducts give the place a bit of an industrial feel.  Oddly, much of the luxury seating is down at ice level, as the lower sections on one side are made up of suites, with additional luxury seating being up high as well.  The concourse runs about half way up the seating area, and gets quite crowded at intermission.  With a capacity of only 4195 Colts tickets are usually in high demand, and with the design of the arena being what it is there is little room for standees, except for a spot on one end and in the corners of the concourse.  A simple, older video board sits above center ice but serves the purpose it is intended for without trouble.  With a single seating bowl, and steep seats the Barrie Molson Centre has a big-time feel to it when it has a capacity crowd, as it did for this sold out game against the Kingston Frontenacs.

The game day presentation and atmosphere at a Barrie Colts game is modern, and filled with sideline activities, but is also full of fun and centered upon the Colts theme.  The iconic "Call To The Post"  trumpet music is played before each period, and the horse theme is carried out throughout the presentation.  For this game, despite being a weekend late for St. Patrick's Day, the Colts donned green jerseys, making for a rather different look on the ice than the normal blue and yellow the Colts are known for.  The fans in Barrie are clearly an educated bunch, and they don't get unnecessarily excited, but they know the game and can respond with voluminous cheers when appropriate.  We honestly thought the fans were quite a bit more vocal and enthusiastic than they are given credit for, having been known as one of the quieter fan bases in the OHL.  The steep seating angle makes watching hockey here very enjoyable, with a feeling that you are right on top of the play.  There is quite a bit of promotional and advertising activity, including lots of ads on the video board, and lots of crowd giveaways led by the roaming female announcer who tries to work the audience.  Intermission is full of activities, including the typical fan shootout contest, and a garden tractor race, which took place after the second period.  The game itself was entertaining, with a fantastic fight, but the Colts came up short and Kingston took a 4-2 win.  Despite all of the modern trappings in the game presentation we do want to applaud the Colts as, despite the team being only 20 years old, they have a keen interest in their history.   A mural on one wall on the concourse is designated as the "Captains Wall" and features photos of all of the team captains.  In addition to that, there are several banners hanging from the ceiling celebrating team record holders in the various statistical categories.  It is cool to read some of the names on the banners, as some of the high ranked goal scorers went on the NHL success, while others seemed to have disappeared from the hockey scene.  For a mid-90's building the Barrie Molson Centre has a bit more character and sense of history than many of its peer arenas built in that same era.  Fans in Barrie seem content with the building, and the constant near capacity crowds reinforce the fact that the Colts and the Barrie Molson Centre have a good thing going. Other information about the Barrie Colts can be found at:  Colts Home

Other information about the Barrie Molson Centre can be found at:  Arena Home

More photos of the Barrie Molson Centre can be found  Here