Up until a couple days before attending a game here we had honestly not heard of Arena Leo-Paul Boutin, and had never taken in any Junior B games (known as Junior AA in Quebec) in this Province.  Nonetheless, with an afternoon Junior A game in Princeville a mere 4.8 miles away, we decided to attend a game here and see the V. Boutin Express.  The arena is a simple square building with gray metal siding.  The nondescript barn sits on the edge of town next to a school, and both the school and arena show their age.  Arena Leo-Paul-Boutin opened in 1974, and the Boutin family clearly has a prominent place in the town of Plessisville as the arena and team both share the family name.  A short half mile ride up the road will find a trucking depot which houses a fleet of V. Boutin Express big rigs for which the team is named.  This is a simple place, and, although not fancy, likely holds a lot of great memories for townsfolk as the V. Boutin Express has been one of the most successful teams in the Ligue Junior Hockey AA Estrie / Maurice, and even brought the Coupe Dodge back to this setting as the Junior AA champs in all of Quebec in 2006.  Entry into this old-school arena is through a small lobby which is attached to the high school, and there are some trophy cases in the lobby which house some of the wares earned by the team over the years.  A ticket for this Sunday night preseason matchup was $5, and the game was against the Chaudiere-Ouest Husky, which normally compete in the Ligue Junior Hockey AA Chaudiere-Appalaches, another one of the 7 Junior AA leagues in Quebec.  Plessisville seems like a town that loves its hockey, although a small turnout was on hand for this preseason contest.

Once you enter the arena through the doors from the lobby you find yourself in the corner of the rink and see a simple setup which features 3 rows of colorful wooden seats on each side of the ice.  There is an aisle that runs behind the seats and a rail for standing room.  The ceiling is rather low, and a single scoreboard is on the far end wall.  The arena has a few quirks as well, as the near end wall is painted in gaudy 1970's colors, including orange, yellow, and gray.  The wall along one side of the arena is full of banners recognizing local teams, some of which appear homemade.  The Coupe Dodge banner is displayed, and the arena has a homey feel to it.  This definitely feels more like a community rink than a "big time arena", but it seems to hold a ton of character between its walls. The capacity is listed at 600 seats plus standing.  The place to be at this arena seems to be the upper level, which features an upper walkway which overlooks the ice, and leads to the snack bar area which also serves beer.  Although there were probably only 150 or so fans in attendance the upper walkway was packed full of fans watching the game from that vantage point.  Every seat at Arena Leo-Paul-Boutin is close to the ice, and the glass is also relatively low.  There is protective netting covering only the ends of the arena, so viewing is unobstructed.  This is a basic, yet sufficient, place to watch some hardworking hockey players ply their trade.

The gameday presentation at a V. Boutin Express game, at least at this preseason game, is about as straightforward as it gets.  There was not even the playing of the National Anthem, which is something we have encountered elsewhere in Quebec.  The PA was loud for music that was played, but muffled for goal and penalty announcements.  Although the crowd was not large it was evident, even with my limited understanding of French, that most folks knew each other as is typical in small towns, and there was mainly a friends and family type crowd on hand.  There are no contests or activities between periods, and most folks head to the snack bar at intermission to warm up.  This arena does have a couple of interesting characteristics though.  In keeping with the trucking theme of the team there is a good sized replica of one of the red tractor trailers which the company owns,and it is mounted on a steel rail.  When the V. Boutin Express score and the goal horn is sounded the truck slides (or drives) across the steel beam behind one of the goals as the crowd celebrates.  This is a neat touch and brings a bit of uniqueness to the arena in Plessisville.  Unfortunately the truck only rolled out once on this night as the visiting Husky claimed a 4-1 victory.  Still, the action on the ice was physical, and the players hustled.  Unlike any Junior B action we have seen in other areas of Canada the players wear the full cage like the NCAA. We are never crazy about the cage, and, although not a major deal either way, feel it takes away a little bit from the fun of junior hockey.  Arena Leo-Paul-Boutin will not likely be mistaken for the Bell Centre, or even any of the larger arenas in the Province which host teams in the Q.  It is an intimate place which holds a decent amount of history within its walls, and is home to a successful franchise which keeps local fans happy.  The families in the area seem to enjoy that, and we are sure the Boutin family who puts their effort into hockey in this little corner of Quebec enjoy it as well.  Plessisville was certainly not the "go to destination" on this hockey trip, but it is a fun place to catch some small town hockey. 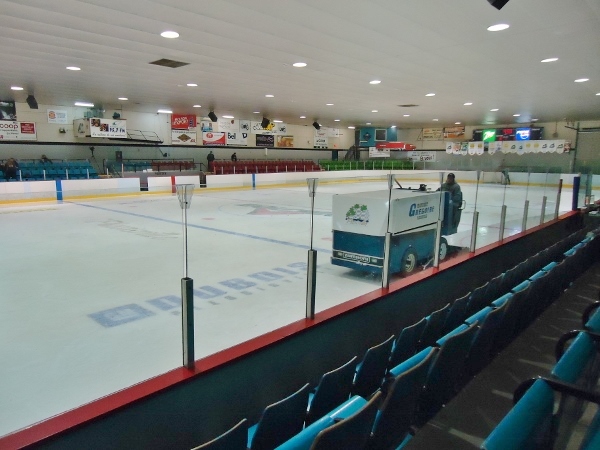 Other information about the Plessisville V. Boutin Express can be found at:  Team Facebook Page

Other information about Arena Leo-Paul-Boutin can be found at:  Plessisville Arena Home

More photos of Arena Leo-Paul-Boutin can be found  Here