Granby is a small city about an hour East of Montreal, and is best know for having one of the largest zoos in North America.  There is also a fair amount of hockey tradition in Granby too, as Centre Sportif Leonard-Grondin was built in 1967, and hosted a paid of Q teams, the Granby Bisons and the Granby Predatuers.  The building was then known as Arena Leonard-Grondin, but a recent large renovation which was completed in 2011 saw a major modernization of the facility, the addition of a third ice pad, and the removal of the old colorful wooden seats.  The new version is a great example of a building that has maintained "old bones" yet has become much more fan friendly and on par with many newly constructed arenas.  Sitting on the edge of downtown Granby, there are nearby sports fields and stadiums, and, as with most Canadian arenas, the arena is a true community center.  The modern exterior features a tasteful combination of tan brick, brown concrete and glass.  A block letter sign sits on the upper facade of the arena.  There is also a modern sculpture along the corner of the arena.  When looking at the arena from the street you would have no idea that the building dates back to the 1960's.  The main entrance is at the lower level, and features a lobby with access to all 3 ice pads, and a box office area.  The interior is modern as well, but the walls are painted a somewhat gaudy orange color.  The Granby Inouk have been receiving lots of community support and are coming off of a Junior A Provincial championship last season.  Tickets for this Thursday evening matchup against the Terrebonne Cobras cost $10 and were general admission.  A merchandise table inside the main lobby had a fair amount of Inouk gear, but much of it seemed to be carried over from last year.  In only the second week of the regular season we would guess new shipments would arrive soon.  The vibe of the arena has a very "Quebec feel" to it, and you can experience a bit of a sense of history in the building despite the modern upgrades.

Entering through the main doors from the lobby you find yourself at the end of the arena at ice level.  An aisle runs along the ice which is cut off by the team benches which are on opposing sides of the ice.  A smaller, narrower concourse runs atop the seating area, above the 7 rows of red, gray, and beige plastic seats.  Exposed rafters are visible, and a small center ice scoreclock hangs from the rafters.  The most prominent feature when looking at the arena is the end section which features an igloo-like tunnel through which the Inouk players enter the ice.  The tunnel slides out when it is time for the players to enter or exit, and features signage which proclaims "Go Inouk Go" over the top of a section of seats which is blocked off to make the igloo.  It looks a bit cheesy and homemade, but adds a ton of character, and has the Inouk Eskimo logo inside the letter "O" in "Inouk".  Yet, this is their home, and we imagine it was rocking during last year's cup run.  The near end of the arena features a restaurant and snack bar with seating which overlooks the ice, and a simple 2 rows of additional seating below the restaurant.  A tribute to Granby hockey history is present on the far wall of the upper concourse as there are several Inouk banners, as well as a wall of fame type area which has photos of past Granby players including NHLers Pierre Turgeon, George Laraque, and a goalie that you may know named Patrick Roy.  Surprisingly absent is the 1996 Granby Predateurs Memorial Cup Banner, or anything that even eludes to the fact that the champs of all of junior hockey even occupied this building at one time.  The cinder block walls and concrete grandstand risers are clearly from the original arena design, and the front row seats, although set back from the ice a bit, are raised up to provide a good view.  There is some dead space in the corners, but overall the sight lines here are quite good.   A listed seating capacity of 2685 does not include standees as many folks choose to stand along the upper concourse.  A crowd of 3000 could easily fit within the confines of the arena.

The gameday presentation at an Inouk contest is professional, yet all business.  There are no contests during intermission, and the crowd of only 400 or so was subdued by Quebec standards, but if you have experienced hockey in Quebec you know that does not mean they were quiet.  The PA system is extremely loud, and the goal siren even louder.  The game presentation, and arena both share an old time hockey feel, and the fans seem to enjoy themselves.  A canned cheer of "Lets Go Inouk" is played over the PA a bit too frequently, but it is not that big of a deal.   A pressbox area hangs over the upper concourse on one side, but there is not really any luxury seating to speak of as anyone can sit at the restaurant seating.  Those present are working class hockey fans there to see their team work hard and compete.  The hometown crowd had a lot to cheer about as the Inouk took a 6-2 victory in a game that featured lots of chippy play and a very good scrap.  We would think that weekend games, or games later into the season, would attract much bigger crowds as Granby is among the attendance leaders in the league.  The Q may have left town a couple of decades ago, but there is still some very entertaining hockey in Granby, and with recent upgrades the Centre Sportif Leonard-Grondin is now the caliber of arena which could once again host a major junior team if the opportunity ever arose.  The 1960's root of the arena are still evident, but you have to dig a bit to really notice them.  The zoo may draw most of the out of town visitors to Granby, but those who decide to catch an Inouk game while in town will come away glad that they stopped at this arena. 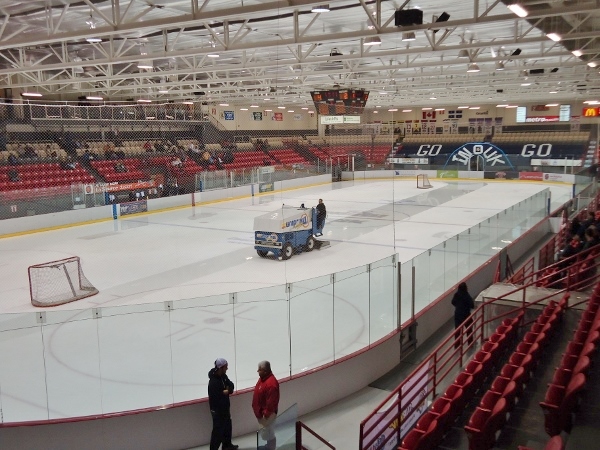 Other information about Centre Sportif Leonard-Grondin can be found at:  Arena Home

Other information about the Granby Inouk can be found at:  Inouk Home

More photos of Centre Sportif Leonard-Grondin can be found  Here