Moncton and the adjacent city of Dieppe have large Francophone populations.  In addition, Universite de Moncton is in the city, and serves as a French language university serving Francophone students in the Maritimes, and attracting many students from Quebec.  Arena J.-Louis-Levesque sits on the edge of the school's campus,and is home to the university's men's and women's hockey teams.  Having opened in 1966 the large square building sits in an area with parking lots on both sides, and has the appearance of what a big box store might look like from afar.  The tan concrete walls also have brown metal siding in areas, and the large, flat roof is dark brown and features metal panels across the wide soffit.  The area next to the arena walls features a grassy lawn and some trees, and the entrance is on the end of the building and marked by a simple raised-letter sign affixed to a small brick fascia where the entry doors are.  A digital marquee sign sits in front of the building and announces upcoming events, in French as you would expect.  The appearance of the arena is that of a style that would have been modern in the 1960's.  The arena serves as a worthy home for the Aigles Bleus, who compete in the tough Atlantic University Sport circuit, and the school has brought home the University Cup 4 times in years past as the national champions of Canadian University hockey.  Dubbed "Le Nid des Aigles" Arena J.-Louis-Levesque in referred to as "the eagles' nest".  Although university hockey often flies under the radar in Canada, especially in cities with major junior teams such as Moncton, the Aigles are well supported by students and community members alike.  The 7pm starting time for this Saturday night matchup against St. Francis Xavier made for a perfect double as we left the Moncton Coliseum, where the QMJHL's Wildcats played a 4pm game, and made the 2.5 mile drive in time to secure a $12 ticket from the small and crowded box office in the lobby and head upstairs in time to grab a hot dog and catch the national anthem before the puck drop.

Once inside Arena J.-Louis-Levesque the crowded and small lobby area has doors that lead to ice level of the arena, but fans are directed upstairs to an upper concourse area by the burly looking security staff who work at the arena.  The arena itself is laid out in a simple 2 grandstand design, with 8 rows of seats running the length of the ice on each side.  A fairly narrow aisle runs atop the seating on each side, and the end above the entrance lobby has plaques and photos commemorating Aigles Bleus teams and stars of the past.  The interior of the building has a modern look and with the low, flat ceiling the arena looks small from the inside.  Seating is made up of plastic seats, which are blue and yellow in color.  The lobby area on the far end of the ice is a busy place as it is heated and features the food concession stand as well as a decently stocked Aigles team store.  There is seating at tables along the glass overlooking the ice, and quite a few folks choose to watch the entire game from there while sipping a coffee or other beverage.  With such a low ceiling, and exposed yellow metal rafters hanging below, there is no center ice scoreclock.  A scoreboard hangs along the wall above the goal on each end.  One design feature which is made apparent almost immediately if you choose to watch from one of the upper rows of seats, or stand along the rail on the concourse, is that there are support pillars extruding up from the seating area which can block your view rather easily.  The poles are a reminder that you are in an arena that is 50 years old, despite the rest of the interior having such a modern, clean look. With French language advertising in many spots the building has the feel of a small town arena such as you would find in Quebec.  The listed capacity is 1516, but in the past it was not uncommon for over 2000 fans to be crammed into the arena to watch the Aigles Bleus.  This game featured 2 teams in the CIS top 10, so fans have had successful teams to cheer for over the years.

The gameday presentation and experience at Arena J.-Louis-Levesque for a Aigles Bleus game is mostly business,and conducted largely in French, but all PA announcements are made in both English and French.  The attendance for this game was listed at around 700, so the arena was about half full,  Songs over the PA are a mixture of French language songs and traditional pop songs.  There were some students in attendance, as well as a few other folks who made the ride over after the Wildcats game like myself.  There was a fan shot contest from center ice as well as kids contests at both intermissions to keep folks entertained.  When there is a goal the goal horn sounds, and as the goal announcement is being made a eagle screeching sound is played over the PA. Sight lines are not that great here with the poles in the way and the fact that the glass is very high even at the center ice area, but there were plenty of places to move around to get a good view if needed.  The arena itself offers some interesting old-school features which add to the enjoyment of watching a game here.  On the wall above the entrance to the snack bar lobby there is an old school standings board showing the AUS conference standings.  The Aigles are referred to as "U de M" on the board, and the school usually goes by that French abbreviation when being referred to by most.  The team benches are on opposite sides, a not uncommon layout but one that we always appreciate.  The arena is colorful, and intimate, so things can get loud with such a low ceiling and tight confines.  The Aigles Bleus led early, but ultimately lost 4-1 to St. FX, so the local fans did not have a lot of opportunities to get loud.  The level of play is excellent with almost everyone on both rosters having previously played at the major junior level, and many having played some pro hockey.  We can imagine that with a full house during playoff time this place would be rocking.  Having been around for 50 years Arena J.-Louis-Levesque is still modern enough to serve as a well appointed home for the Aigles Blues for years to come, and has served that purpose well.  The arena has been used as an emergency backup for the QMJHL's Wildcats when the Moncton Coliseum was booked during playoff scheduling a couple times, but this is simply a university barn, and a fun, culturally diverse one at that.  The Wildcats may get most of the attention from hockey fans in the area, but U de M offers a skilled level of hockey, and Arena J.-Louis-Levesque feel like their home, and truly is Le Nid des Aigles. 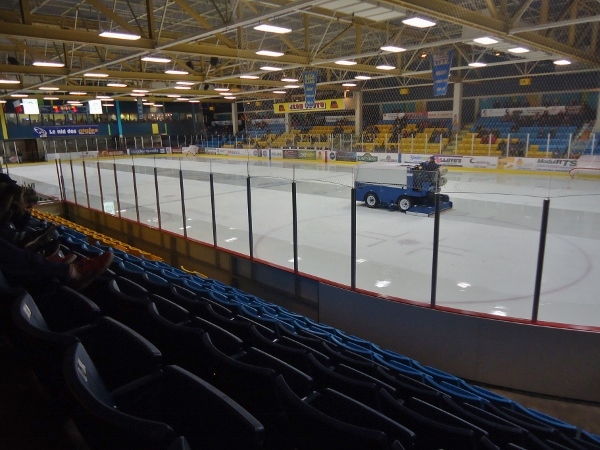 Other information about Universite de Moncton hockey can be found at:  Aigles Bleus Home

Other information about Arena J.-Louis-Levesque can be found at:  Arena Home

More photos of Arena J.-Louis-Levesque can be found  Here