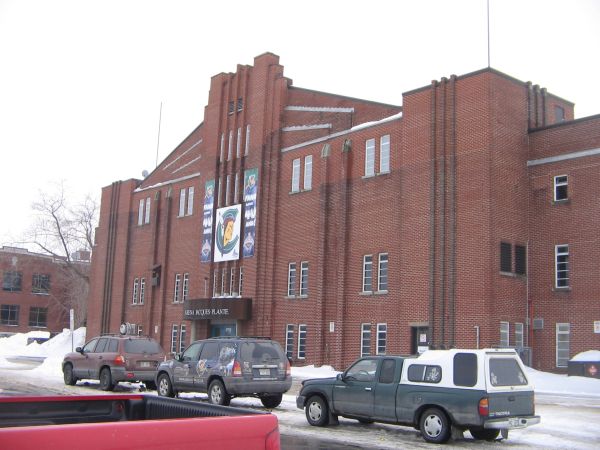 The highlight of my Quebec trip was a chance to see the famed Arena Jacques Plante in action.  This pre-war building which was built in 1937 remains virtually unchanged and is a throwback to the glory days of hockey.  Sadly the building will be retired from use in the QMJHL as the Shawinigan Cataractes have a new home under construction which is set to open in December of 2009.  This old brick building sits at the edge of downtown along the banks of the Maurice River.  It was renamed in honor of native son Jacques Plante, known as the first goalie to wear a mask,  in 1994.  There is parking available across the street in a small lot, as well as on the streets themselves.  Parking was a little tight on this day due to the enormous snow banks which are the result of the record setting winter in this part of Quebec.  The building has classic styling on the outside, and once you walk inside it is as if you entered a time machine.

I arrived a couple hours before game time and bought my ticket at the small ticket office which sits to the right as you enter.  I also poked around and took some photos while it was still daylight.  A ticket for tonight's Q league matchup against Baie Comeau cost $13.  You enter the doors to the arena at the end of the rink and are at ice level.  To your left are the washrooms as well as a snack bar.  Hot dogs were a bargain at 75 cents, and they were the traditional smaller dogs with the white bread type bun you generally only find in Eastern Canada and New England.  There is also a souvenir stand to your left as you walk in, and I, of course, stocked up on my requisite souvenir puck.  If you so desire they also have air horns for sale, but if you don't purchase one don't worry as there are enough other fans equipped with the noise makers to more than make up for it.  In order to enter the seating area you must go up the stairs either to the right or left.  At the top of the stairs you can walk around the arena on a tiny concourse, which is barely wide enough for 1 person to pass behind the standee patrons, let alone wide enough to accommodate traffic going in both directions.  The thing you immediately notice are the ancient wooden benches which are painted in bright colors and give the place a definite old feel.  The benches are hardly comfortable, and are set up such that if someone needs to get by you to get to their seat there is barely enough leg room for them to pass.  Also the backs of the benches are at close to a 90 degree angle with the bottom of the bench.  Not the most comfortable design for sure.  Still the neat experience of sitting on the benches and watching the game offsets the uncomfortableness of the benches themselves.  There are even a few old fashioned wooden folding chairs like you would see at grandma's house on thanksgiving when the kids have to sit at their own table.  These are used at the end of aisles in some spots, and are painted the same bright colors as the benches themselves.  The seating above the concourse aisle is actually just slab benches covered in rubber mats like you would find in a skate lobby and are less expensive.  They are however mostly limited view seats as the support pillars near the top of the lower seating area block the view depending on where you are seated.  There is also a very large section of benches on the end of the building near the entrance, and these seats extend high above the seats around the rest of the ice.  The end seats are all a bright yellow.  In looking around the building the only changes appear to be that the organ music is now piped in over the PA instead of played live. Even the Zamboni is old.  One negative is that the lighting comes from the sides of the rink, rather than hanging over the ice, so if you sit on the side the light from the opposite side causes a little bit of a glare, making watching the game a little tough.  In addition to the lower snackbar there is a second one on the concourse level behind the upper level stands on the end, and I tried the poutine there, which was excellent.

The game experience itself is also a throwback to times of the past.  No PC atmosphere here.  The team skates onto the ice through a giant Tee-Pee.  As mentioned the crowd is raucous, with airhorns and noise makers blaring frequently.  The glass around the rink is low- as you would expect at an older barn, and they pack in large crowds into the arena, which is listed as holding 3700 with standees included.  For an older building the PA is very good, as is the music selection during stoppages.  The most unique thing about the game experience is the large wooden Indian hanging from the ceiling above the large end grandstand.  When the Cataractes score it is sent down a zip line of sorts over center ice and the crowd cheers wildly.  No flashy fireworks on a video screen here, strictly old school stuff.  There is no center ice scoreboard, as that sits on the wall at the far end of the rink.  The game itself was pretty wild and exciting for the home fans.  The Cats scored 4 first period goals, enough to cause the Baie Comeau goalie to get pulled, and ended up winning 8-4.  This is definitely a hockey crowd as they know when to cheer, when to boo, etc.  I was also reminded of how much hockey is a part of Canadian culture as they had the typical kids hockey game during intermission.  These kids appeared to be between 7 and 9 years old.  The amazing thing was when they skated onto the ice the goalies were both doing full splits, the defensemen were doing backward crossovers, etc.  You wont see that at a Richmond Renegades game!  It is a real shame that this place wont host the QMJHL anymore as it is a classic arena.  They seem to draw well enough with the old building that it is still viable.  Sure the seats are very uncomfortable, the place looks pretty run-down, there are poles that block your view, and navigating the concourse at intermission is a real challenge, but this place has something a newer arena will never have- character and charm.  Go there while you still have a chance. 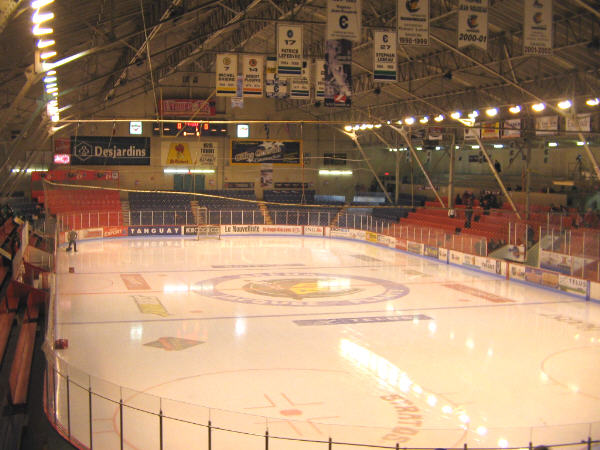 Other information about the Shawinigan Cataractes is available at:  Cataractes home