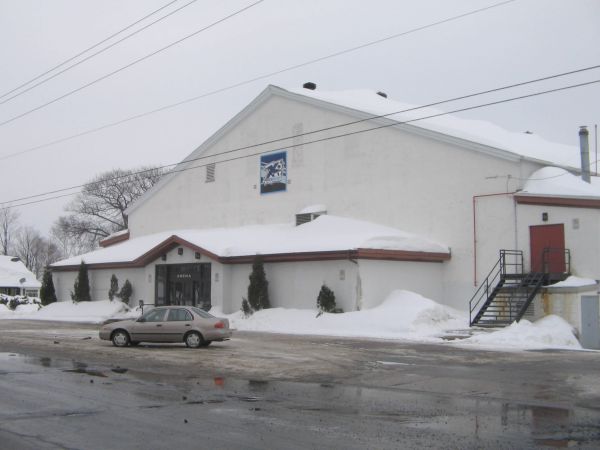 Its always good to have a backup plan.  On my recent Quebec trip my backup plan found me at the Arena Grand-Mere, just outside of Shawinigan, for an LCH playoff matchup.  When planning my trip the original schedule called for me to attend a Quebec Remparts game at the famed Colisee Pepsi in Quebec City, but a pending blizzard made me change plans and stay in Shawinigan for 2 nights, thus enabling me to discover this hidden treasure of an arena.  I had no information about the place except for the address, and drove by the day before the game so I knew where it was.  What I found was a nondescript building on the edge of a residential neighborhood.  It doesnt look like much from the outside.  Parking is available in a very small lot at the rink, and on street as well as in the parking lot of the baseball field next door.

On game day I made my way the 7 miles to the arena through a fierce blizzard, which started about 6 hours before game time.  Inside is a very small lobby with box office windows where you can get your ticket.  Tonight's playoff matchup vs Charlevoix cost a reasonable $10.  Once inside the arena itself I had to do a double take as the place looked like  a mini replica of the nearby Arena Jacques Plante, complete with brightly painted wooden benches and all.   I have no information on when the arena was built, but based on the stylings would guess it to be in the 1950s.  To enter the seating area you must go up a set of steps to either the left or right.  This brings you to the wide concrete concourse which runs behind the seating.  There are about 6 rows of seats on each side, along with a 15 row seating area on the far end of the arena, which for this game was blocked off with advertising billboards and signs.  I am not sure if this section is ever used anymore, but looks like it easily could be.  The building itself, although older, seems well cared for and neatly maintained.  Of course just like in Shawinigan there are support pillars which can block your view of the action.  On the end of the building where the entrance is is a large glassed in luxury box, and there also glassed in office type rooms just off the concourse in the corners at that end as well.  Underneath the high grandstand on the far end is the restaurant, which you would never know was there had there not been signs marking its presence.  The hot dogs were good and reasonably priced. There is a relatively modern center ice scoreclock.  As mentioned the benches are a virtual carbon-copy of the high-backed benches in Shawinigan, although these ones seem to have even less leg room (if that is possible).  This made me find a standing room spot after the first period.

The fun part of tonight's game was not only finding a neat old arena which I knew virtually nothing about,  but also experiencing the sights and sounds of the LCH style of play.  The LCH is considered a semi-pro league, which frequently sees players going back and forth to and from the better know LNAH.  My understanding is that many of the players, especially the fighters, are paid very well in this league, yet many of the other players are paid little to nothing per game.   Like most pro or semi-pro teams in Quebec the team bears the name of a sponsor.  I have no idea what Bionest does other than it is some sort of environmental company.  I would like to also thank them for sponsoring hockey in such a rough and tumble environment as this.  This is definitely throwback hockey for sure.  The glass around the arena is as low as possible, and during warmups the home fans were heckling the visiting players non-stop.  In almost Slapshot-like style the visiting players were yelling back, sticking out their tongues, etc.  This is definitely not a very family friendly place to go as there were a number of fights in the stands, which were immediately noticeable as a pack of security guards wearing red shirts would rush to that part of the arena and seperate the combatants.  One fight even happened right in front of where I was standing.  I guess one of the guys was an Anglo like me as the one security guards told him in English  "one more problem with you and you're gone".   No police escort out of the building, no arrest, etc. as you would find if someone did that in the states.  At this arena you could have a full on slugfest with another fan and simply be told to settle down.  Did I mention this place was a throwback?  Despite the awful weather a pretty large crowd was on hand.  I would guess the capacity of the building at 2000-2500, and the place was at least 2/3 full.  Airhorns and noisemakers were everywhere. When the XTREME scored the fans sitting near the bench actually stood on their seats and leaned over the glass to give the players a high five. The zamboni must be at least 40 years old as well.  I felt as though I was watching a hockey game from the 1970s.

The Music over the PA was VERY loud, almost to the point of hurting your ears, and oddly the PA announcer was a woman, something you dont encounter very often.  Being very nationalistic as many Quebecers are they did not play the Canadian National Anthem before the game.  I guess that is better than playing it and having everyone talk through or ignore the song as happens elsewhere in Quebec.  The  blue collar crowd cheered and booed like they had been waiting all week to yell like that, and overall everyone in the building displayed a ton of passion, including the coaches, players and fans.   The benches are across from each other, and bench clearing brawls are pretty legendary in this league.  The players seemed to be on a tight leash tonight however as this was the opening game of a playoff series.  Still there were 2 good fights, a ton of scrums and a lot of good hitting.  I was a little dissapointed as Quebec semi-pro legend Paul Shantz didnt get a single shift for Shawinigan.  Do  a youtube search for him, you will not only see some good fights, but some pretty cool post fight antics as well.  Shantz did entertain the crowd when serving a bench minor as all eyes in the building were on him as he did a little dance in the penalty box.  He also frequently barked at and made hand gestures to the Charlevoix coach during the entire game.   Shawinigan ended up winning the game about 3 minutes into OT, so the game itself was also very exciting as well.  I am definitely glad that luck and the weather found me stumbling onto this neat arena as my choice for entertainment on this evening.  Despite a very rough drive back to the hotel in thunder and blowing snow conditions I am glad I had the chance to check out a game at Arena Grand-Mere, as well as experience the uniqueness of the old school LCH.

If anyone knows any further information about Arena Grand-Mere, such as when it was built or any other history about the building please let me know. Other information about the Shawinigan XTREME Bionest is available at: XTREME home

*Note- some of the photos in the photo gallery were taken on a return trip to the arena on September 24, 2010*