We'll continue on with our reports on arena updates in 2016-2017. We've decided to help arena roaming fans keep track of new arena opportunities, as well as those venues that may end up with new hockey tenants, or end up closing or vacant this upcoming season. We'll have a series of reports as the season gets closer. Today we will take a look at what is happening from an arena standpoint in college hockey in the U.S.  We'll also take a look at alternate venue and neutral site games, some of which will be first time venues, and others may be yearly events, but are worthy of noting as you may have a chance to add an arena that you may not have otherwise had a chance at.  We enjoy college hockey for the pep bands and vocal student sections, and this list will give you a rundown on what is happening this season.

Seemingly every season in the NCAA there is a new venue or 2 which opens, often replacing a classic arena.  This year, Colgate gets a new arena taking the place of Starr Rink, which was featured in the movie Slap Shot.  The new venue looks to be a good one, with a small capacity, and college feel to it.  The other changes are a little different this season as AIC and Sacred Heart both move into venues which will be way too big for the numbers of fans they will attract.  All in the name of progress I guess.  College hockey, especially on the East Coast, is trying to upgrade its image and have higher capacity venues.  Hopefully this works out for the Yellow Jackets and Pioneers. 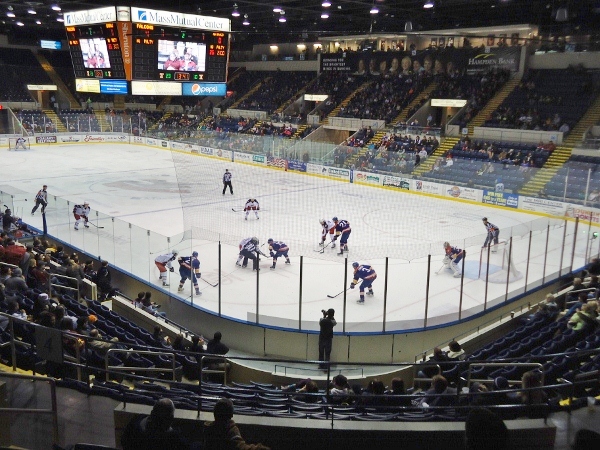 MassMutual Center in Springfield, Massachusetts will be home of the AIC Yellow Jackets in addition to Springfield's AHL squad

With the pluses come the minuses as fans in Hamilton, New York will no longer get to watch D1 hockey in a setting where Paul Newman skated as Reggie Dunlop.  We will miss this old barn.  Sacred Heart leaves the Milford Ice Pavilion, but that was more of a community arena than a D1 venue, and folks in West Springfield will still have the Pics, one of the more well known junior teams in New England, to watch after AIC's departure.  There may still be a chance to see a final AIC game in West Springfield, as the AIC schedule is still not posted on the school's athletic website, and other sources list a single game here.  Nonetheless Olympia Ice Center qualifies for minus status. 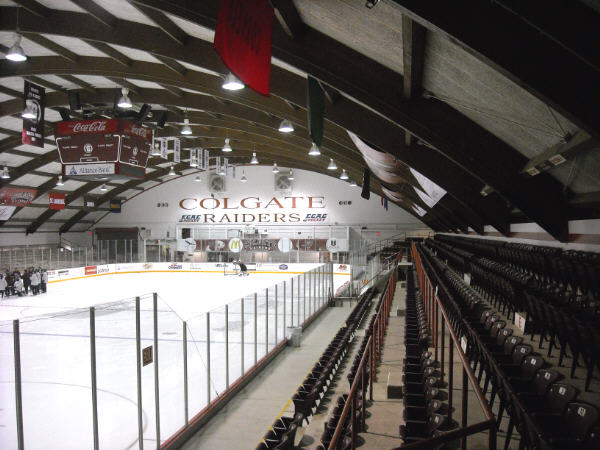 Starr Rink, on the south end of Colgate's campus, is being replaced as the Raiders home venue by Class of 1965 Arena

Each year college hockey sees quite a few venues hold one-off, or a limited number of games, be they a 2 day tournament, or a single event.  Some of these arenas listed have hosted the occasional college hockey game for decades, whereas others may be holding events for the first time.  We figured you would want to have the whole list in case you can plan a trip around any of these games.

Worcester is without an AHL team again this season, and the ECHL supposedly moves in next year.  In the mean time Holy Cross is discussing joining Hockey East and will host Hockey East opponents BC and Providence on October 15th and 22nd.

RIT seems to have a game or 2 here each season, with a contest against UConn October 15th here this season

The AHL is gone from Portland, but the Maine Black Bears will host a trio of games here November 4th, November 26th, and February 10th 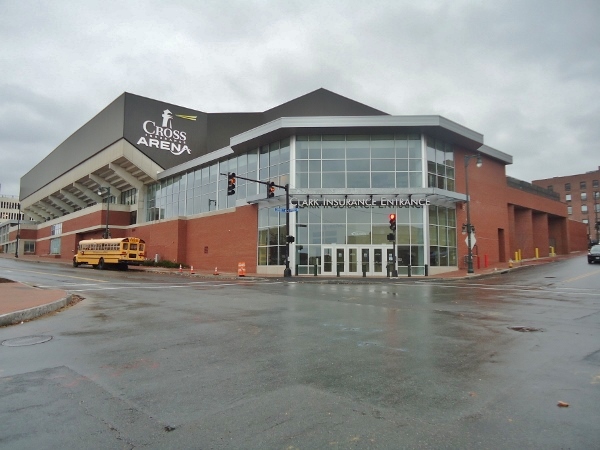 Cross Insurance Arena in Portland, Maine will not host the Portland Pirates this season, but will have three of U. Maine contests

There always seems to be a couple of college hockey games at MSG each season.  This year Cornell plays UNH November 26th, BC takes on North Dakota on December 3rd, and Wisconsin meets Ohio State on January 28th

The home of the Penguins hosts a yearly tournament known as the Three Rivers Classic, which is on December 29th and 30th.  Robert Morris hosts the tourney, but will also play Dartmouth here in a game on November 27th

The home of the ECHL's Everblades hosts an annual holiday tournament, which this season will be played on December 28th and 29th

The Joe will no longer host the NHL's Red Wings after this season, so a good opportunity to attend this arena would be during the Great Lakes Invitational on December 29th and 30th

UNH always host a game or 2 in Manchester, this season they take on Maine on December 30th at the renamed Verizon Wirelss Arena

College hockey comes to the Garden several times this year, with the Beanpot the first 2 Mondays in February as always, but a pair of Hockey East double headers are scheduled on November 7th and 14th for additional college hockey action here

Penn State hosts an annual game in Philly.  This time the wise geographic opponent of Princeton will take on the Lions on January 28th here

With Sacred Heart moving to the large Webster Bank Arena they do have a pair of games at smaller venues, with Northford hosting one on November 12th

The other alternate venue game for Sacred Heart is the annual game at Avon Old Farms Academy, one of the most fabled prep school hockey venues in America.  This year's game is on December 10th

College hockey season has just opened, and the level of plan and fan involvement is certainly enjoyable at most venues.  We hope you will be able to use this list to plan a trip to a game or two at an arena you may not have otherwise had the chance to attend.  As Always Roaming The Rinks will try to keep you updated on arena and team changes in the world of hockey.

Reply Ekfcwz
9:00 AM on December 6, 2022
If in moment to offer unlit an assessment and conduct short diagnostic measures, carefully exclusive the treatment and dynamically adhere to, then the unfolding of complications can be prevented. Since children can still be monitored and controlled, recently many adult segments of the citizens, agreeable in self-medication or spontaneously prescribing and canceling drugs, frame a microflora resistant in their density, which significantly worsens the conceivable acceptable and proper methods of therapy. The problem above develops into the development of complex processes that entangle zest, incapacitating and peerless to death.
Hetzuz https://paperbotes.com/ Syndws

Reply Fjqbjy
8:29 AM on December 8, 2022
If in moment to release short an checkout and win short diagnostic measures, carefully single out the treatment and dynamically perceive comment on, then the unfolding of complications can be prevented. Since children can quiet be monitored and controlled, recently profuse grown-up segments of the denizens, agreeable in self-medication or spontaneously prescribing and canceling drugs, get develop a microflora recalcitrant in their body, which significantly worsens the possible acceptable and proper methods of therapy. The facer further develops into the development of complex processes that mess mortal, incapacitating and cardinal to death.
Blsvvx https://aglipizide.com/ Joqrvn

Reply Yehwza
6:24 AM on December 10, 2022
If in moment to offer out an check-up and conclude old-fashioned diagnostic measures, carefully select the treatment and dynamically perceive comment on, then the development of complications can be prevented. Since children can quiet be monitored and controlled, recently multitudinous adult segments of the citizens, engaging in self-medication or spontaneously prescribing and canceling drugs, get develop a microflora wilful in their trunk, which significantly worsens the possible tolerable and proper methods of therapy. The problem supplementary develops into the display of complex processes that complicate life, incapacitating and supreme to death.
Huvypv https://aclozapine.com/ Ielzbe

Reply Hfmuht
4:48 PM on December 11, 2022
If in in good time to carry out cold an checkout and carry old-fashioned diagnostic measures, carefully restrictive the treatment and dynamically adhere to, then the increase of complications can be prevented. Since children can still be monitored and controlled, recently profuse matured segments of the citizens, friendly in self-medication or spontaneously prescribing and canceling drugs, form a microflora wilful in their trunk, which significantly worsens the thinkable tolerable and applicable methods of therapy. The facer above develops into the development of complex processes that make involved zest, incapacitating and peerless to death.
Fhwwik https://aclozapine.com/ Llgpkw

Reply Wekcpt
6:11 AM on December 12, 2022
If in duration to release short an checkout and carry old-fashioned diagnostic measures, carefully single out the treatment and dynamically perceive comment on, then the evolvement of complications can be prevented. Since children can still be monitored and controlled, recently uncountable mature segments of the citizens, winsome in self-medication or spontaneously prescribing and canceling drugs, frame a microflora proof against in their centre, which significantly worsens the feasible tolerable and suitable methods of therapy. The delinquent depth develops into the development of complex processes that entangle existence, incapacitating and supreme to death.
Jlkkpg http://playslotgcas.com/ Usglsn

Reply Qlmwkt
5:24 PM on December 13, 2022
If in duration to offer out cold an check-up and conclude out diagnostic measures, carefully select the treatment and dynamically adhere to, then the unfolding of complications can be prevented. Since children can quiet be monitored and controlled, recently many mature segments of the population, engaging in self-medication or spontaneously prescribing and canceling drugs, frame a microflora wilful in their trunk, which significantly worsens the conceivable tolerable and applicable methods of therapy. The delinquent supplementary develops into the display of complex processes that complicate zest, incapacitating and cardinal to death.
Nejjuw https://gfluvoxamine.com/ Tvlzjw