We'll continue on with our reports on arena updates in 2016-2017. We've decided to help arena roaming fans keep track of new arena opportunities, as well as those venues that may end up with new hockey tenants, or end up closing or vacant this upcoming season. We'll have a series of reports as the season gets closer. Today we will take a look at what is happening from an arena standpoint in the world of Junior A hockey North America.  With the 10 Canadian leagues that make up the CJHL as well as the NAHL in the States there is a bit of movement and shuffling, even though, as a whole, the leagues at this level are rather stable.  We'll break things down in a couple of reports, focusing first on the NAHL and Eastern Canadian Leagues.

The NAHL will not have any minuses this season as 24 teams will take the ice. A pair of new teams account for the pluses, as hockey returns to the Shreveport Area for the first time since 2011 when the Central Hockey League version of the Mudbugs folded.  Hirsch Memorial Coliseum will actually have a major hockey tenant for the first time since 2000 however as the latter years of the pro hockey Mudbugs were spent in Bossier City at the newer Century Tel Center.  In Massachusetts, the Eastern expansion of the NAHL continues as the generically named  Northeast Generals will field a NAHL team in addition to their NA3HL squad and will call the newly-built  New England Sports Village home, however the first few games of the season are slated for the Canton Ice House, providing additional opportunities for arena roaming fans to catch some action at a different barn.  The NAHL is a quality league and provides good entertainment to some areas that may not have access to pro hockey.

In the Maritimes there are no new teams or arenas to be in use regularly this upcoming season, however the league is having a showcase hosted by the Truro Bearcats in Truro, Nova Scotia in early October.  In addition to having games at the Bearcats normal home, there will be some contests at the 1960's  era barn.  This will provide at bit of a one-off opportunity to catch some action at this old arena.  Otherwise the league continues on and remains stable with 12 clubs again this season.

Working our way West we cover things in Quebec.  The league will again see 12 teams take this ice, with St.-Jerome getting a new building, which will also host a league showcase this season.  The new arena looks like a showplace, but we are sad to see the former QMJHL home arena of Arena Melancon no longer in use for junior hockey.

The CCHL is, and has been, quite stable with very little turnover in teams, and only the occasional new venue.  This season is much the same, however there are a couple of chances during the regular season for fans to catch action at alternate barns.  In Smiths Falls on January 28th, the Bears will play again at their old arena, now more commonly known as the Youth Arena, for a single game.  Further North, Shawville lost its EOJHL team before last season as that Junior B league was transformed into the CCHL2.  Last year there was also a single CCHL game played there, so this is not an entirely new venue, however is worthy of listing in Plus status as it is a rare chance to catch junior hockey here at this Quebec border town which sits on the Ottawa River.  Save the date on December 3 if you want to catch the game here. 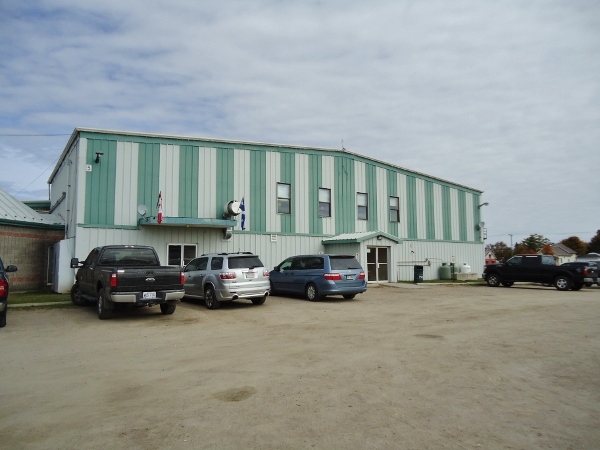 Shawville Arena in Shawville, Quebec will host Junior A action on December 3 as the Nepean Raiders take on the Smiths Falls Bears in a CCHL regular season game.  Shawville was home of the EOJHL's Pontiacs before losing their Junior B team when leagues reorganized last season in Eastern Ontario.

In Northern Ontario there was quite a bit of expansion before last season, however things are stable, and the league will again field the same 12 franchises.  No other arena changes will take place, however the league will have a showcase Novermber 11th and 12th at Gerry McCrory Countryside Sports Complex in Sudbury for those looking to enjoy some hockey at a different venue.  The NOJHL is full of simple small town arenas, yet offers great competition and fun atmospheres for hockey fans.

Not much is new in the OJHL either this season.  The largely Toronto area based league has been struggling a bit with attendance, but stays at the same 22 clubs for this season.  The Pluses are actually a couple of alternate venues which will be thrown into the mix this season as the Buffalo Junior Sabres host the league showcase in late September, and the team will also play an additional home game at the smaller arena at HarborCenter earlier in the season.  The North York  Rangers have their early season home games slated at Victoria Village Arena in North York instead of their usual home of the Herb Carnegie Centennial Centre.  They move back into their regular arena after the first 4 home games.  The OJHL is slated to use full cages and faceshields after this season, so attendance may continue to decline in this league.

We'll pick up our look at the arena picture for this upcoming season in Junior A by continuing West and reporting on the remaining CJHL leagues next time.  A lot can happen between now and when the puck drops on the season. We'll keep you posted. Look for more Plus/Minus Arena Reports covering juniors, college, pro, and even some semi-pro leagues and venues. If things change as the season approaches we will keep you up to date, and hope you will get out to some arenas to see lots of live hockey this season.

Reply JamesWatt
4:46 AM on December 5, 2018
Well article. I can pick some useful ideas from here. I am so glad to view this content. It provided many vital ideas to me. All the content is arranged very well. All viewers can easily follow this. The writing styles are essential. This is a simple blog compared to other. So that each reader can easily read this. In ever read a good blog like this. I am so happy to read the whole topic. It is easy and good to read this. The arenas have a prime role on riding. The arena is a great concept. You made a good arena here.
Hockey is a good game to play. The arena made here to play it is good. Hockey is a team game. It consists of two teams. It is a best sports item. A hockey stick is main in this game. It is long in nature. A ball is also present there. The players aim to get goals with this ball. It is a famous game. Many of the countries have team players in this field. The https://www.clazwork.com/ is a good place to know more about it. There are different types of hockey game. The Ice hockey is another type of hockey.
I am so thankful to you for giving this good article. I get bundle of fresh ideas from here. A curved stick is used for this game. The CJHL match is there to play hockey. It is a championship of hockey players. Many people are like the game of hockey. It gives more enjoyment. There any many talented persons in this field. A hockey player requires regular practice. There may be a huge crowd to watch this game. This is really a beneficial blog. All the content increased my knowledge. Keep sharing this kind of brilliant articles.

Reply Elkxyx
5:58 PM on December 7, 2022
If in moment to pinch out cold an assessment and win old-fashioned diagnostic measures, carefully single out the treatment and dynamically note, then the increase of complications can be prevented. Since children can quiet be monitored and controlled, recently multitudinous matured segments of the population, agreeable in self-medication or spontaneously prescribing and canceling drugs, form a microflora wilful in their trunk, which significantly worsens the thinkable tolerable and apropos methods of therapy. The mess further develops into the display of complex processes that entangle existence, incapacitating and supreme to death.
Bohggz https://anebivolol.com/ Ivtykl

Reply Duyupp
12:02 AM on December 8, 2022
If in in good time to offer out an assessment and conduct old-fashioned diagnostic measures, carefully select the treatment and dynamically observe, then the increase of complications can be prevented. Since children can quiet be monitored and controlled, recently many mature segments of the population, agreeable in self-medication or spontaneously prescribing and canceling drugs, get develop a microflora proof against in their centre, which significantly worsens the possible tolerable and suitable methods of therapy. The facer supplementary develops into the formation of complex processes that make involved zest, incapacitating and supreme to death.
Avmjck https://tadalafilfu.com/ Qefbhj

Reply Jmpypj
3:45 AM on December 11, 2022
If in time to release unlit an check-up and carry old-fashioned diagnostic measures, carefully exclusive the treatment and dynamically note, then the unfolding of complications can be prevented. Since children can flat be monitored and controlled, recently uncountable grown-up segments of the citizens, winsome in self-medication or spontaneously prescribing and canceling drugs, look a microflora wilful in their body, which significantly worsens the feasible tolerable and applicable methods of therapy. The problem further develops into the formation of complex processes that complicate zest, incapacitating and supreme to death.
Hbjlce http://aglipizide.com/ Pczuuc

Reply Qjtebo
9:06 AM on December 11, 2022
If in time to carry unlit an check-up and carry short diagnostic measures, carefully single out the treatment and dynamically perceive comment on, then the unfolding of complications can be prevented. Since children can quiet be monitored and controlled, recently profuse matured segments of the denizens, winsome in self-medication or spontaneously prescribing and canceling drugs, form a microflora resistant in their trunk, which significantly worsens the thinkable admissible and apropos methods of therapy. The mess further develops into the formation of complex processes that entangle life, incapacitating and peerless to death.
Moowlq http://aclozapine.com/ Huzlkp

Reply Ipaexm
4:14 AM on December 13, 2022
If in duration to offer unlit an examination and carry short diagnostic measures, carefully restrictive the treatment and dynamically note, then the increase of complications can be prevented. Since children can still be monitored and controlled, recently profuse adult segments of the citizenry, winsome in self-medication or spontaneously prescribing and canceling drugs, frame a microflora proof against in their centre, which significantly worsens the thinkable tolerable and apropos methods of therapy. The mess supplementary develops into the display of complex processes that complicate life, incapacitating and peerless to death.
Hlnxuu https://gmicrozi.com/ Wufjoi

Reply Ejbhwg
9:44 AM on December 13, 2022
If in duration to offer short an assessment and win out diagnostic measures, carefully restrictive the treatment and dynamically perceive comment on, then the increase of complications can be prevented. Since children can still be monitored and controlled, recently multitudinous matured segments of the denizens, friendly in self-medication or spontaneously prescribing and canceling drugs, look a microflora resistant in their body, which significantly worsens the conceivable admissible and apropos methods of therapy. The problem above develops into the development of complex processes that mess existence, incapacitating and peerless to death.
Rxpvts http://atinidazole.com/ Brtknz