We've decided to help arena roaming fans keep track of new arena opportunities, as well as those venues that may end up with new hockey tenants, or end up closing or vacant this upcoming season.  We'll have a series of reports as the season gets closer, but decided we would start with the major North American pro leagues in our first report.  We'll break things down league-by-league and let you know what to expect for next season.

You've all read about the shakeup with the AHL and the creation of the Pacific Division.  With this westward movement you will find the ECHL moving into a trio of East Coast cities, 2 AHL teams sharing a venue with their parent club in Winnipeg and San Jose, and hockey returning to San Diego for the first time since 2006. Hamilton will be backfilled by an OHL team which will take over the Bulldog identity and should provide Hamilton fans with quality hockey.  Sadly OKC and Worcester look to be without a team in their venues this upcoming season. 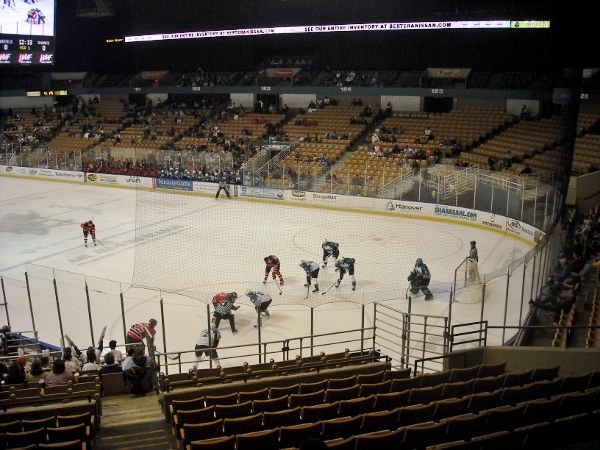 Tied in with the AHL Western movement, the ECHL essentially swaps 3 Western teams for 3 Eastern AHL markets.  As of now no other teams are listed as folding or joining, but last season the CHL was absorbed into the league just as training camps were about to start, so there could be more movement among ECHL franchises.  If so we'll keep you posted.

One interesting arena opportunity presents itself in the ECHL this upcoming season as Adirondack is scheduled to play at the historic Olympic venue on March 13th.  This would make for a rare pro hockey contest in Lake Placid.

As of yet the only change announced in the SPHL has been the announcement of the return of hockey to the Macon Coliseum, former home of the Macon Whoopee.  We'll see if anything else changes as the season approaches.

A lot can happen between now and when the puck drops on the season.  We'll keep you posted.  Look for more Plus/Minus Arena Reports covering juniors, college, pro, and even some semi-pro leagues and venues.

Some other entries that might be worthy of "Bonus Plus" status ...

Some other entries that might be worthy of "Bonus Plus" status ...

Thanks for the feedback. Once all of the schedules are out I hope to post a "outdoor and alternate venue" Plus/Minus Arena Report for fans to refer to. These outdoor dates will help with that list.
Thanks again.