Monkeying Around With The Zambonis

You're a hockey fan like I am.  You know the deal.  It's summertime, and summertime sucks.  Your Twitter feed is full on endless Tweets about random signings, and, even worse, rule changes that will make the game "safer" and less exciting.  You do have a few options in the summer though.  You could break out your LNAH fight DVD, or troll Youtube for highlights from your favorite team, or even play the movie Slap Shot or Youngblood on your computer screen.  Perhaps the coolest, most fun option is to simply hit play on a Zambonis song.  The Connecticut based hockey rockers have been mucking in the corners and patrolling the crease of the hockey music scene for over 2 decades, with the occasional breakaway goal, including appearances at the NHL All Star Fanfest and Frozen Four.  You've head their songs over the PA at your favorite hockey arena and you may not even know it.  They do it for fun, though, and could easily take their musical talents in a different direction seeking to have hits on mainstream radio.  Instead they do what they do, and bring joy to hockey fans everywhere.  Hockey is fun.  Rock music is fun (even with the occasional techno or country twist).  How could the combination of hockey and rock be anything but fun? 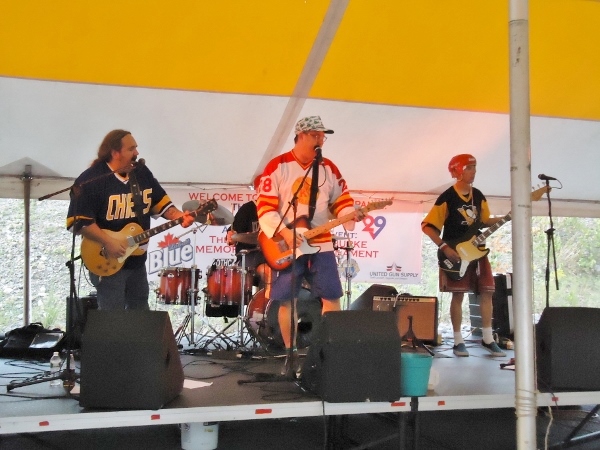 The highlight of my summer so far was getting to see the Zambonis take the stage at the annual Dave Burke Memorial Hockey Tournament near Wilkes-Barre, PA.  What's a  two and a half hour drive to have as much fun as you would have at an actually pro hockey game?  The show can be labeled as nothing other than fun.  The band clearly enjoys playing, and enjoys hockey even more.  From classics like "Breakaway" to "Bob Marley and the Hartford Whalers" they rocked out for a solid hour and a half, complete with an appearance by the Hockey Monkey during the song of the same name.  During a quick break before they decided to go overtime and play a second set I had a chance to chat with the band, including frontman Dave Schneider and drummer Mat Orefice and talk hockey, hockey barns, travel and even old Soviet Arenas.  At that time I was offered the chance of a lifetime to don the Monkey Head and jersey and play the role of the Hockey Monkey in the second set.  On one hand I felt like a kid finding out the truth about Santa when I realized that the Hockey Monkey was not a real monkey, but I could not turn down the chance.  A few fist bumps with the crowd and counting out the chorus of "1-2-3 the kids love the monkey" with my fingers and my tenure as Hockey Monkey was over.  I was pumped up for the rest of the show and had an easy ride home from the buzz of having such a great time.  The boys in the band like to have fun, and that energy transcends to the crowd.  A full set of hockey rock classics with a couple cover tunes thrown in made for a hockey-centered evening where you could not help but look forward to fall and your favorite team hitting the ice. 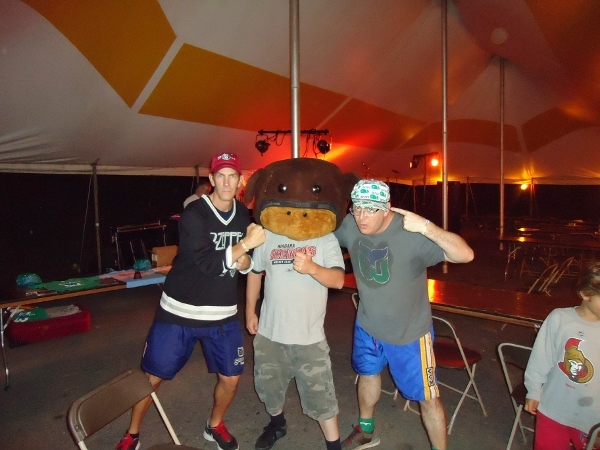 So even though it is still summer, you can get your hockey fix easily by checking out the Zambonis site, ordering up a CD or downloading an album or 2.  Summer doesn't have to suck for hockey fans, and the cool thing is you can still listen to the band during hockey season.  If you have a chance to see the boys hop over the boards an onto the stage to take their shift at entertaining hockey fans I would recommend you do it.  Your favorite music artist may be Metallica, or the Ramones, or even Jason Aldean, but the Zambonis do one thing those guys simply don't do.  They write songs about hockey.  They write the songs and make them sound cool. Oh, and their mascot is probably cooler than your team's mascot too.

You can learn more about The Zambonis at  http://thezambonis.com/