Arena # 2 on the list is just one of those places that all hockey fans must visit.  We were fortunate enough to see the Chiefs play multiple times at this old barn, and now the fans in Johnstown have the Tomahawks of the NAHL to cheer for.  The War Memorial is nothing fancy, yet it fits the gritty nature of Johnstown to a T.  On our first visit there (before we even thought of the Roaming The Rinks concept) we fell in love with what this building had to offer.  Sitting in the top row as the linesmen skated out to check the nets and ice for warmups you could hear every carve of the skate blade.  Fans are that close to the action here. Factor in the fact that since the Charlestown Chiefs of Slap Shot played here and the movie was primarily shot here it makes for a fun evening anytime you can experiene a game in this setting.  You know you will be repeating movie quotes every chance you get too.  We salute not only the building, but the hockey fans of Johnstown, who are flat-out great.  With its proximity to Pittsburgh, Johnstown will always be a football town, but hockey has a special place here, and thankfully, (except for the removal of the wooden seats), folks can experience that unique, old-fashioned vibe for years to come hopefully.  Get to Johnstown some day and check out some "old time hockey".  Watching a game here is the best re-creation of a trip to the 70's that you could imagine.

Check out the full review and photo gallery at:  http://www.roamingtherinks.com/cambriacounty.htm 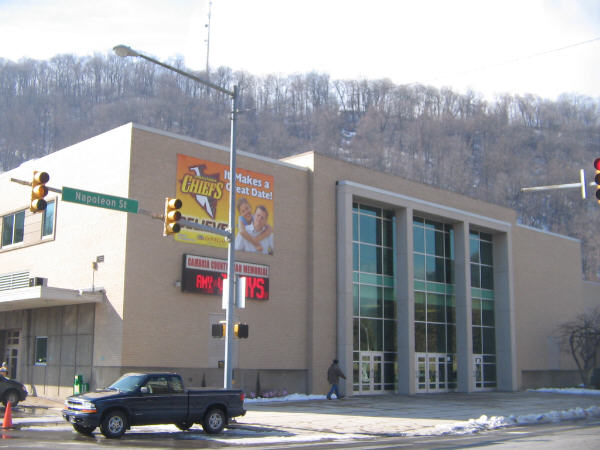