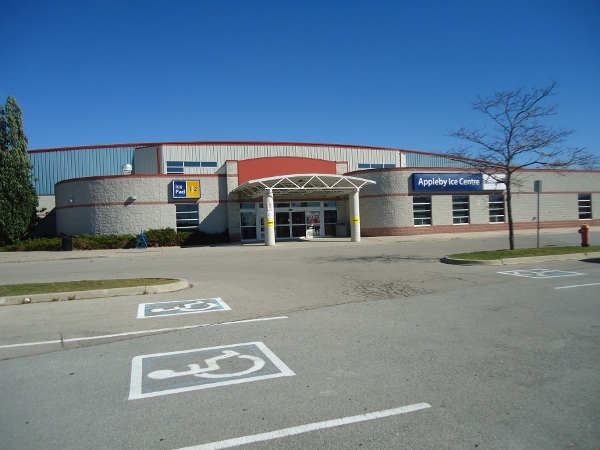 The Burlington Cougars have a long history and lots of tradition, having existed as a junior team since the mid 1970's, and having been a Junior A level team since 1993.  The last 5 years have found quite a bit of change for the Cougars though, as they moved from their traditional home at Central Arena to the less than ideal setting of Wave Twin Rinks, where we caught the team in action in 2013.  Now the Cougars find themselves occupying Appleby Ice Centre.  This was a Thanksgiving afternoon contest against the St. Mike's Buzzers, and the building was buzzing with activity all day, but not because of the hockey or the holiday, but rather because this was a voting site for the Canadian national election.  The building fits in well with the suburban industrial surroundings of the neighborhood, and sits back off the road a bit with a decent sized parking lot in the front of the building.  Having opened in 1999 the facility boasts 4 ice pads, and has the simple look of a warehouse or industrial building.  The exterior boasts a gray brick facade with a small metal awning marking the entrance.  There is a simple sign boasting the name of the arena and the grounds are well kept.  Standing back a bit you can see the gradually sloping roof and slate blue and tan metal siding which makes up the exterior of the ice pad area of the building.  Pale red accent stripes extend around the building.  Honestly, the exterior looks very similar to that of the Cougars former home, Wave Twin Rinks, which sits a few exits further up the 403 Highway.  The similarity was so much so that a quick double check of the internet to make sure this was indeed a different building took place while in the parking lot.  Despite being similar to Wave Twin Rinks in appearance Appleby Ice Centre seems more suited as home of the Cougars, and is a bit more spectator friendly and accommodating.  A ticket for this 2pm contest was $10, and tickets were sold just inside the main entrance at a table which also had signage announcing the Cougars presence and paying tribute to current NHL's who are former Cougars, including Cory Conacher and Kevin Bieksa.  Despite being over 15 years old the arena looks modern, and is clearly more of a community arena than a spectator oriented venue, but with the crowded hockey scene in this part of Ontario Appleby Ice Centre is certainly sufficient for the size of the crowds that the OJHL draws in the area.

Once inside the entry doors to Appleby Ice Centre you find yourself in a lobby area.  Two of the ice pads can be seen from this lobby, and there is a simple snack bar concession stand and table seating off to the left which overlooks rink 1, which is the rink where the Cougars play.  Inside a simple entry door into the rink itself you are at ice level on the end of the rink and can see the stairway which leads up to the elevated grandstand.  The seating layout finds 10 rows of wooden bleachers which are attached to a concrete slab.  The grandstand runs the entire length of the ice, and the whole grandstand structure is elevated about 12 feet above the ice surface, so even the front row is fairly high up.  Above the seats there is a small concourse aisle, and standing rails complete with a shelf which provide another vantage point to watch the game.  There is a press box above the seats at center ice.  The large metal ceiling rafters slope away from the stands and downward toward the far wall at a gradual pitch.  Grandstand seating capacity is listed at 750, but with standing along the top and along the boards at ice level 1000 fans could fit in here without much trouble.  The upper concourse aisle can be accessed from a second stairway which leads directly up from the lobby, and there is also some viewing available at the upper corner of the rink from the upper lobby.  There is a simple scoreboard on 1 end of the ice only, and the layout and look of the arena is very basic, but clean and well kept.  The team benches are both below the grandstands, with the locker rooms being behind the benches and underneath the grandstand.  With the elevation of the seating, and the nearness of the front row to the ice, it is difficult to see the action along the near boards, but otherwise the sight lines are decent overall.  There is little that can be considered fancy or state of the art for fans when attending a game at the Appleby Ice Centre, but the facility does provide a solid venue for both the team and fans who attend.

The gameday presentation at a Cougars game at Appleby Ice Centre is basic and all business.  The low key presentation features music during the stoppages and basic introductions of the starting lineups, but there are not a lot of frills or fanfare here.  Nothing happens at intermission except for the resurfacing of the ice, and many fans head down to the lobby to warm up or grab a coffee before play starts again.  Attendance was not announced, but the grandstand was surprisingly well occupied considering this game was on a Monday afternoon during Thanksgiving.  We would guess about 250-300 folks were on hand.  Much of the crowd was made up of scouts and parents, as the OJHL is heavily scouted and with this being one of the few Monday games there were quite a few scouts on hand carrying their notebooks.  There were also quite a few locals who seem to be on hand as fans of the team, and even a number of Cougars jerseys were evident in the crowd.  We are guessing attendance is better for a normal Friday night game, but those on hand seemed closely interested in the on ice action and were not there to socialize or for simply something to do.  Thankfully there is not netting in front of the seating area to obscure the view of the fans, as is all too common in Ontario.  There wasn't a whole lot of "atmosphere" to be experienced at this game as the fans, although supportive, were rather quiet and subdued, and with the Cougars not having called Appleby Ice Centre home for very long you don't get the sense that much tradition has been built up yet.  The on ice action was good as always in the highly skilled OJHL, with the Cougars taking a rather easy 5-1 win over St. Mike's.  We were glad to be able to find an afternoon stop off on our way back from Southwestern Ontario, and this stop to see the Cougars play at another venue was fun.  There are so many hockey options in the area between the various OJHL teams, the AHL, OHL, and other teams that sometimes teams like the Cougars get lost in the shuffle, but catching a game here is certainly worth your time if you are in the area. Other information about the Burlington Cougars can be found at:  Cougars Home

Other information about Appleby Ice Centre can be found at:  Arena Home

More photos of Appleby Ice Centre can be found  Here