Ah the Colisee- one of my favorite old barns.  I made a last minute visit last spring for the final game of the first round of the QMJHL playoff series pitting the MAINEiacs vs Drummondville.  Astute readers of RTR will know that  a review of this building has been on my site for quite some time, albeit with photos provided by others as when I made my first visit in 2007 I had not yet hatched Roaming The Rinks, and did not bring my camera along.  Reading late season news on the  various message boards made me worry that hockey would be lost at the Colisee as the news, even from the team owners, was that the team would be moving to suburban Montreal for the 09-10 season.  I had to be in Boston for a family medical issue, and as far as I knew the last ever MAINEiacs game would be played on this date.  Needless to say I was stoked to make a return visit here, and even more stoked when I found out from the locals that the deal to move the team north of the border fell through a week or so earlier and there would indeed be MAINEiacs hockey again next year.

Fans in Lewiston are lucky, very lucky, to have such a fun old barn and be able to see the skill and speed of the QMJHL not only in a small town, but in an American small town as they are home to the only U.S. franchise in the Q.  Couple that with relatively cheap tickets ($14 got me a good seat for this game) and you have a hit.  The arena sits on the edge of downtown and has a couple large parking lots surrounding it.  When pulling up to the main entrance you think you are at a new arena, when in fact the building opened in the late 50's.  The new facade of multi colored bricks really stands out. This new addition built just before the MAINEiacs inaugural season in 2003, is built into the side of the hill, and houses the box office on the lower level, and the new food court area above it.  Once you climb the staircase to the upper level you enter into the arena and realize this is indeed a 1950's vintage barn.  There is a narrow concourse complete with a small booth selling line-up cards for a dollar, and a souvenir booth and even a pro shop.  There are a couple food and drink booths, and the rest of the food is available in newer food area.  To get to your seats you have to go down a long, narrow hallway which runs down both sides of the rink, and houses the smallish locker rooms underneath the stands.  This building is truly an example of old meets new as it has all the charm of an older building, but looks new on the outside and is updated enough inside to make it more comfortable for the fans.  Its neat to see the area of the outside of the building where the new addition meets the old concrete exterior of the building.

Once inside the arena itself you notice there is a very low ceiling, making the place feel smaller than it is, and providing for an imposing atmosphere for visiting teams as it gets loud in here.  The seats are blue wooden seats with metal framing, and are not overly comfortable.  The seating in basically in a 4 grandstand design, although there is seating which brings the corners together on one end of the rink.  Team benches are on opposite sides, and the sight lines from most seats are good.  There is an old school pressbox hanging over the grandstand on the MAINEiacs side, and a they have added small video screens in the corners.  The arena holds less than 3,700, so it is small enough for fans to be right on top of the action.  There are skinny plastic benches which make up the last couple rows on each side, and clearly they were added to try to give the place more capacity as there is very little legroom on these seats, and they are hardly comfortable.  Despite its age the place is well kept, and the blue seats are complimented by the orange railings to show off the MAINEiacs colors. The renovations which took place just prior to the team coming to town in 2003 were simple, yet nicely done.

Aside from this being an older simple arena of the type I generally favor the place has a lot more going for it which makes it a must see stop for any hockey fans.  Simply put- I know of no other place where you can experience a game just as you would in the Province of Quebec while still being south of the border.  So much of the game presentation reminds me of the way things are done in Quebec.  They play techno during the warmup.  They sing the Canadian anthem half in english, half in french.  The PA announcer, much to his credit, has flawless french pronunciation of both the players and team names.  Want another example?- There are a few airhorns in the crowd, albeit not as many as at some QMJHL games.   These are some things that only a place named "the Colisee" can pull off, and they manage to do it all without being cheesy.  They also do a good job with the game presentation itself, with strobe lights at player intros, fun post goal celebrations, a couple unique mascots, and a generally cool theme for the team.

Just as good as the things the team and arena staff do to make this feel like genuine Canadian hockey, are the fans themselves.  Yes attendance has been down since the team won the QMJHL title in 06, but the ones who go to the games love their team and are not afraid to show it.  This playoff game only had a couple thousand fans, but they were there to support their team despite insurmountable odds against Drummondville, the team who ultimately represented the Q at the Memorial Cup.  Even when the MAINEiacs were down 6-0 after 1 period the fans hung in there. Despite the last minute decision and the 2 and a half hour drive I am glad I made the trip.  Seeing the players raise their sticks to salute the fans after the game was well worth the trip, as the players too were likely upset over the possible move of the franchise.  I am sure there are some hard feelings and upset fans over the plans for ownership to skip town with the team, but while they still have hockey here I suggest you go.  It is an absolute blast! 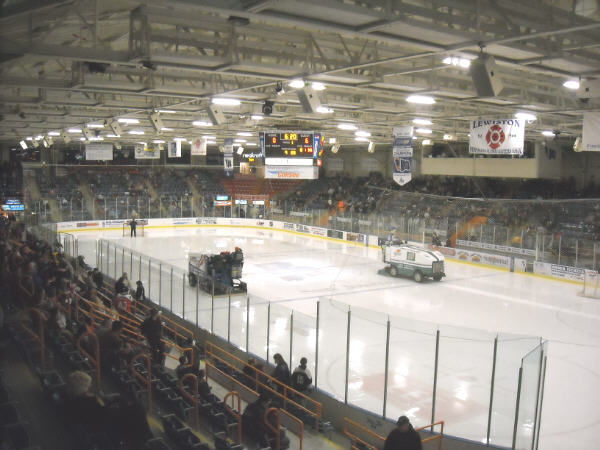 *Note-  This is the second version of an arena review of the Colisee, and was written after my second visit to the arena.  To read my original review click Here .

Other information about the Lewiston MAINEiacs is available at:  Maineiacs home

Other information about the Androscoggin Bank Colisee is available at: Arena home

More photos of the Androscoggin Bank Colisee are available Here