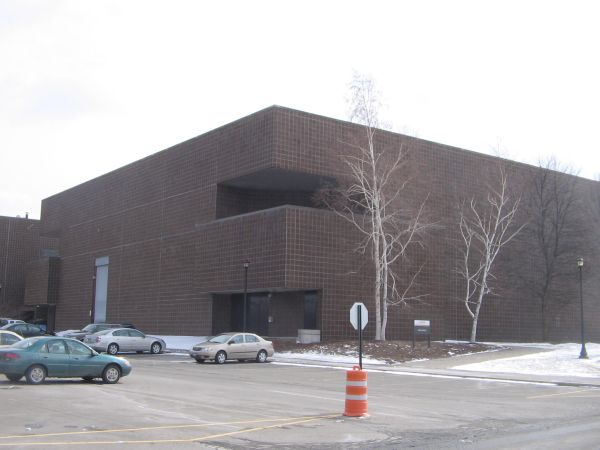 The city of Cortland in Central New York is home to Cortland State University, also known as SUNY Cortland.  The school is home to some storied athletic programs, although they would be the soccer and lacrosse programs rather than the hockey team.  Still this is a decent place to take in a game if you are in the area.  A last minute decision had me making the tuesday night  drive up for this game against Morrisville State.  The arena sits on campus, which is usually a good thing and frequently means high attendance by the student population.  Although on campus it does sit off to the edge of the main halls and sits in the shadow of the fields playing host to the aformentioned soccer and lacrosse programs.  Parking is free, and seems to be plentiful enough.  The building itself is a large rambling structure which houses 3 gyms, a pool and other athletic facilities.  When I tried to enter there was no clear entrance from the side of the parking lot I was on and I ended up strolling in a back entrance and up a flight of stairs right into the seating area of the rink.  I later found out that the other side of the building is where most everyone enters, and that is where you can pay the reasonable $4 admission.  A free program book/lineup sheet is provided.  The ice rink appears as though it is at the back of the building, although if entering from the road and passing the atheltic fields it is the first part of the building you come to.  The large windowless brick exterior leads little indication that this is an arena, and could easily be mistaken for another college hall or campus building.

I hustled after work to get there and arrived about 10 minutes before game time and found only about a dozen fans there.  I had heard how Cortland historically draws very poorly for their games, I was just surprised there were this few people there considering the rink is on campus, and Cortland is a pretty big town.  I am guessing the draw of AHL teams in Binghamton and Syracuse within 40 minutes, and Division 1 Cornell only 20 minutes away gives the hockey fans in the area plenty of alternatives.  Official attendance was listed at 186, but I would honestly be surprised if there were that many people there, although some did arrive just after the game started as is typical with campus rinks.   This was a weeknight game though so they may draw a little better on the weekend. SUNY fans will immediately notice the similarity to the arena of rival Geneseo as the 2 are virtually identical.  There is a walking track around the top of the arena, and a railing seperating the track from the back row of the bleachers.  This makes for excellent standing room viewing.   Although standing room is not needed at Dragons games it is nice to know you can stretch a bit and watch the game. The track serves as the concourse to walk throughout the arena.  The Benches are both on one side of the arena, with the penalty boxes on the opposite side.  The seating provides a decent view as there are about 10 rows of bleachers on each side.  The bleachers are the roll-out lond you would frequently find in a high school gym (as mentioned that is the identical set up as Geneseo).  The capacity including standees is listed at 2500 people.  There is a traditional overhead scoreboard above center ice as well.

Overall the game presentation itself is decent, with music during stoppages, etc.  They even had a professional looking Dragon Mascot who was handing out free prizes to some younger kids in attendance.  In the lobby area there is a reasonably priced snack bar.  The lobby also houses most of the trophies and awards the school has earned over the years for its various atheltic successes.  The game itself found Cortland taking it to first year SUNY rival Morrisville 8-3.  It was good to see a few kids make the trek from Morrisville to watch the game as that is only about an hour northeast of Cortland.  This has the making of a good rivalry once Morrisville gets more acclimated to SUNY play.  I liked this place as it is a good rink to watch hockey at a reasonable price.  The difference between Cortland and Geneseo is the amount of support, as Geneseo has among the most vocal Division 3 crowds, whereas in Cortland I could just about hear a pin drop the whole night.  I wish they would get some more student support and even pick up some more support from people in the town as although not as exciting as a Syracuse Crunch game you can still see some decent hockey without fighting the crowds or spending a ton of money.  I am glad I took in a game here.  If you plan it right you could even take in an occasional afternoon game in Cortland and then head to a nearby "big time" AHL or Division 1 game in the evening if you so desire. 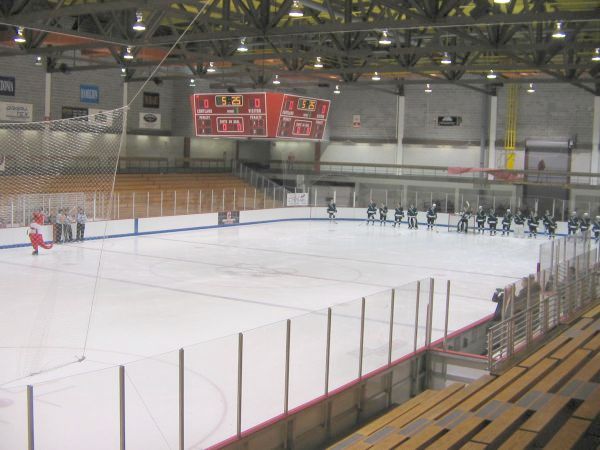 Other information about the Cortland State Red Dragons is available at:  Red Dragons Home

Additional information about Alumni Arena is available at:  Arena home