We have the pleasure of seeing games at a lot of arenas,  including a lot of old arenas.  Once in a while we encounter an arena like William Allman Memorial Arena, a place where time seems to stand still. Watching a game here, with the good sight lines, small capacity, and boisterous fans would be fun in and of itself, but the fact that this arena stands as a nearly perfectly restored monument to its 1924 opening makes experiencing a game here priceless.  I guess you could best sum it up by saying that watching a game in Stratford is like watching a game in a hockey museum, akin to if the Washington Capitals played in the Smithsonian.  Not only is the old barn itself a gem, but its setting on the banks of the Avon River in the charming town of Stratford make for a combination that can't be beat.  The game on this date was a second round playoff matchup against the Elmira Sugar Kings, and there was certainly a playoff atmosphere in the air.

The exterior of Allman Arena, known as Stratford Arena when it was constructed, looks very much like a barn, similar to Windsor Arena.  There is a brick  2 story lobby attached to the front of the building, and a nondescript newer sign on the front of the box office, which juts out onto the sidewalk a little further than the rest of the facade.  The front wall of the box office is actually made of opaque glass bricks.  There is a small parking lot across the street from the arena, and an even smaller lot flanking the side of the building near the river, and both lots were rather full an hour and a half before game time.  The place honestly doesn't look that special from the outside, although its nearly 90 year old structure is clearly well maintained.  Its what's inside of the building that will make any fan of old time hockey's jaw drop upon first entry into the arena itself.  Inside the brick lobby there is a single food concession counter, which was rather efficient, a row of glass trophy cases on the far wall of the lobby, and a closet like space off to one corner with a table set up for Cullitons merchandise, and an old fashioned podium set up to sell programs.

A walk through the doorways into the seating area of Allman arena is a sight to behold.  You immediately notice the high arching barn-like roof, and the colorful wooden seats.  Metal beams jutting out from among the top row of seats rise high above the ice surface, and are painted white, just like the wooden ceiling.  The lower seats are red, and the last several rows are a bright blue, and all are wooden 2 person fold down bench seats, except for the top row, which are non-foldable shelf like benches.  A few years ago the city of Stratford undertook a renovation project on the arena, but did it the right way, and left the structure and styling of the old barn intact.  Now you have a perfectly restored version of a 1920's masterpiece.  Above the seating is a concourse extending all the way around the ice, with old fashioned hardwood flooring, and a width still barely wide enough for one person to pass behind the standing fans along the rail. The walls of the concourse are made of colorfully painted brick.   In the corners are brightly painted signs indicating which corner you are in, and the seats on the end farthest from the lobby extend higher than the seats on the near end.  As with most good old arenas in Ontario there is a portrait of the Queen perched high atop one end.  A secondary hallway below the seating area primarily provides access to the locker rooms, and that too is barely wide enough for 2 people to pass, and includes beams jutting out from one wall at a 45 degree angle, necessitating even a 5 foot 6 guy like me to have to duck to traverse the hall.  There are other quirks, including a zamboni door in the corner that slides completely up and down as opposed to opening.  The sight lines are excellent, except for the beams that do obstruct the view in some spots.  The team benches are on opposite sides, and the home bench extends pretty far into the defensive zone.  Allman Arena is listed as having a capacity of 2800, but that includes quite a bit of standing space.  If you stand on the concourse and close you eyes it is as if you can hear the sounds of hockey as it was 90 years ago.

The fan experience for a Cullitons game is great.  The Culliton family has a construction firm in town, and has been sponsoring the team of their namesake since the mid 1970's.  The indian head logo is in reference to the team's former name, the Warriors.  A good crowd listed at 1548, but which looked much bigger, was on hand to support their team, and they were loud and vocal, and quick to sound their air horns despite being warned by the PA announcer that they were not allowed.  The crowd did seem to be an older crowd, but they are certainly knowledgeable.  Despite having cramped wooden seats and some obstructions due to the beams watching a game here is quite comfortable, and the big center ice scoreclock does not seem out of place under the massive arch of the roof.  The press box hanging from the rafters just adds to the old time hockey look, and there is no need for luxury suites here, as they would detract from the experience.  Being able to experience a playoff game here, with a good crowd on hand, made it easy to see how this place housed an OHA team in the 1940's and 1950's.  Some of the Junior B skaters who called Stratford's ice home include Ed Olczyk, Chris Pronger, and Rob Blake.  This place has such a big time feel, while maintaining a small town atmosphere at the same time.  The game was excellent, and I have yet to see a bad GOJHL playoff game.  The Cullitons lost early in overtime to Elmira, who won 4-3. I was not too concerned with the score however, as simply having a living museum to hockey's past in the city of Stratford for future generations to enjoy is a win in my eyes.  Roaming The Rinks has given praise to a lot of arenas before, but William Allman Arena has what a couple other of our favorite arenas such as Arena Jacque Plante in Shawinigan, and Windsor Arena did not, and that is the perfect combination of modern upgrades and old fashioned, original styling.  Thus this incredible barn in Stratford is now at the top of our list, slightly above Kitchener Memorial Aud.  If you are traveling in Ontario, skip a trip to an OHL game and take in a game in Stratford.  You don't get to go to a museum like this every day. 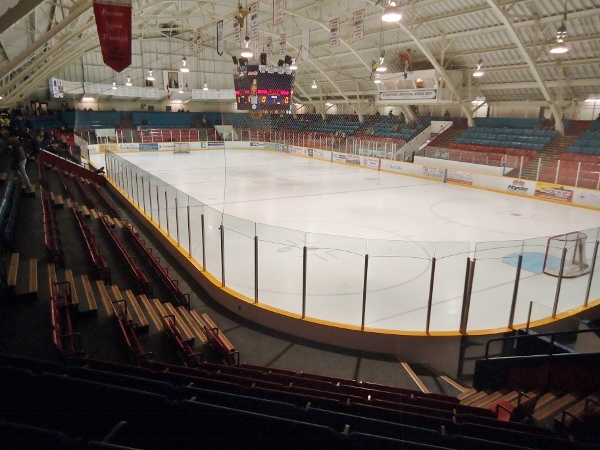 Other information about the Stratford Cullitons is available at:  Cullitons Home

Other information about William Allman Memorial Arena is available at:   Arena Home