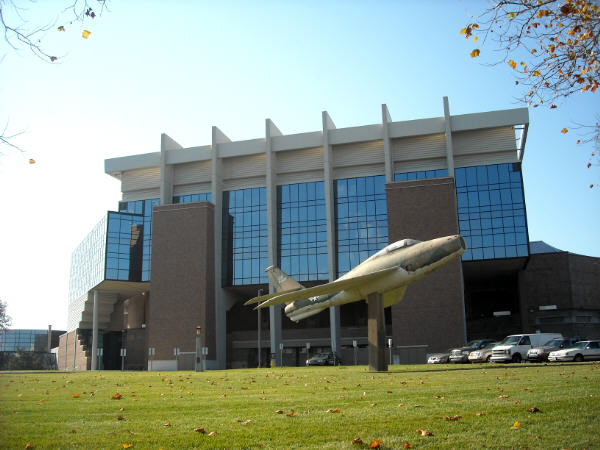 The city of Fort Wayne has a very long and historic hockey tradition.  In fact the Komets are the second oldest minor league hockey franchise in North America.  Only the Hershey Bears have played in the same city longer.  The War Memorial Coliseum was built in 1952, in the same era as many great old hockey barns such as the arenas in Syracuse and Rochester, and originally held 8,000 fans for hockey.  The Komets began their storied existance in the same year, and have been drawing large crowds ever since.  The arena even hosted an NBA team, the Fort Wayne Pistons, in the 1950's.  Fort Wayne and its fans deserve all the credit in the world for supporting their team for so long, even if they don't get much credit for knowing how to spell.

The building actually sits on the outskirts of town, in a commercial area surrounded by malls and chain restaurants.  When driving up Coliseum Boulevard toward the arena you can see its presence well before you are at the actual arena, and it is immediately evident that this place is BIG.  The arena is flanked by large parking lots.  The building itself is a neat mixture of old and new, as brick and concrete structure clearly has an old and sturdy look to it.  The box office and lobby area looks to be part of the 2002 renovation, and the lobby has several nice tributes to area war veterans.  The military plane perched on the lawn outside the arena also reminds you that this is a community building designed to commemorate the area vets.  Word is that the 2002 renovation actually involved raising the roof of the structure to accommodate more seating, and I cannot confirm this, but I am guessing the entire upper level of seating which sits on each side may have been added at this time, bumping up the arena capacity to 10,500.  The grounds and building are clearly old, but well kept.  I secured a ticket earlier in the day, and opted for an upper level ticket for 10 bucks as I have heard stories how unique the view is from up there.  At game time it costs $4 to park on the grounds, and despite a ton of cars all parked in one lot exiting the lot did not seem to cause too bad of a traffic jam.

Once you enter the lobby on game night you need to go up escalators or one of 2 flights of stairs which flank the lobby on each side.  Once inside the building you are on the lower concourse, and that appears to be at ice level, meaning that the ice level of the building is actually on the second story, although this is due to the fact that the box office and lobby structure is built into the side of a hill, with the arena itself sitting above the addition.  The halls are concrete and scream "old school" as you walk through them.  Once inside the seating area you see gray seating which surrounds the ice surface with the seats on the ends being tucked under the triangular roof trusses. The main level concourse opens up about midway up the lower level of seats, and the seating on the side of the lower level extends a bit higher than on the ends.  Sight lines seemed good from everywhere when I was walking around before the game.  There are luxury suites at the top of the lower level on the sides of the ice.  What really sets this place apart from most is the upper level seating on the sides.  Up another staircase and having its own concourse the upper level seats can certainly be considered "nose bleeds", but offer a different perspective than at most rinks.  After climbing the stairs to the upper concourse you can look out a series of windows overlooking the street and parking lot and realize how high up you are.  You are as high as you would be in the cheap seats at an NHL arena (are there cheap seats for an NHL game?).  The upper level is not only high, but the seats are also steep, wicked steep, as my friends in Boston would say.  The press box actually sits atop the upper level seats, making for a challenge for radio announcers across the IHL.  Overall the place stands out as an old school classic when it comes to arenas.

The game presentation and fan experience is typical for minor league hockey, only magnified by the attendance which the Komets get.  This game had 7800 fans in attendance, and was full enough to make for a fun time.  The presentation is basic.  They have only one zamboni, and what looks like an old one at that, so although there are between period contests they are kept short to allow enough time to flood the ice with the single machine.  I had forgotten the difference in they way the do things in the IHL.  I had attended Elmira Jackals game in the UHL for a couple years before the Jackals switched leagues, and the non-affiliated style league (the new IHL is made up mostly of former UHL teams) is a little different.  The teams have warmup jerseys which display a sponsor logo rather than that of the team, and the league seems a lot less concerned with what the NHL does than most leagues.  That is not a bad thing in my opinion.  There are also a lot more sponsor logos on the ice surface than at most places.  The Allen County War Memorial is nicknamed "the jungle",  and although the crowd did not seem that rowdy or imposing to me I am sure the shear numbers of fans can be intimidating to opposing teams.  The fans seem to enjoy their hockey, and have some cheesy chants that they do at certain times in the game, but they definitely seem to be there for the hockey, rather than just because going to a Komets game is something to do.  I saw more jerseys worn by the fans than I have seen at  just about any arena I have visited in the last couple years.  There is a very nice video board which shows replays from multiple camera angles, and on the lower concourse there are displays of past team memorabilia, including the IHL championship trophy, the Turner Cup.  It is also cool that unlike most American arenas the team benches are on opposing sides. The only problem I have with the Komets is that they clearly want to be the big fish in a small pond, opting for a low AA level league like the IHL, when they draw more fans than virtually every AHL team.  I look at them as a team that should never lose, and one with far more resources than most of their opponents.  It kind of makes them a team you want to hate, and hate them I did when my Elmira Jackals played in the same league.  The game I saw here was kind of a snoozer, as the Komets beating Quad City 2-1, but it was neat being in a place with such tradition, and in a town that loves its hockey as much as Fort Wayne. 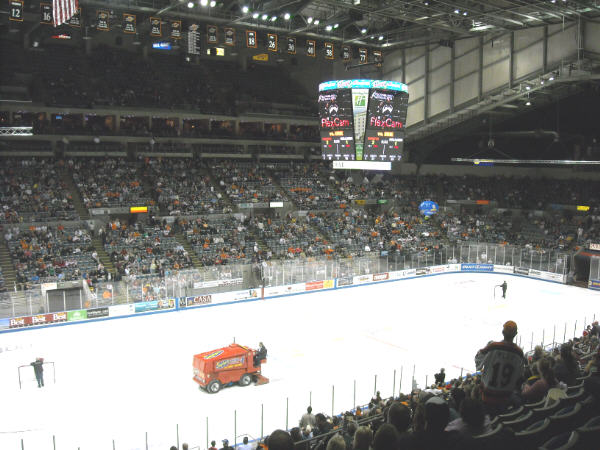 Other information about the Fort Wayne Komets is available at:  Komets Home

Other information about the Allen County War Memorial Coliseum is available at:  Arena Home