University of Maine hockey is a big deal.  The Black Bears are as ingrained into Maine culture as L.L. Bean, the lobster roll, and the use of the word wicked.  Folks like their hockey here, and with the University bearing the identity of the whole state, folks follow the team from across the state and beyond.  The home of the Black Bears is a unique, quirky, and memorable place.  Harold Alfond Sports Arena opened in 1976 and has a distinctive appearance, one that is made up of many white peaks and points, and one which sits low to the ground.  The design is considered an example of hyperbolic paraboloid architecture, and is certainly something different than the norm.  Picture in your mind the term "1970's arena".  Now forget that image as Alfond Arena is completely different.  On this cloudy day the white roof peaks seem to blend in with the dreary gray fall sky in Orono like mountains can sometimes blend into the horizon.  Situated on campus and next to other sports facilities, you can actually climb the bleachers of the adjacent Alfond Stadium to get a look at the building from a higher perspective.  The arena is built into a hill, and the rink and lower level of seating is below ground level.  The walls are made of a tan stucco and a pebbly concrete, and the many roof peaks seem to give the building a sprawling look.  Attached is the Shawn Walsh hockey center, named in honor of the fallen coach who led the Black Bears to 2 NCAA titles.  Parking is a bit limited, but can be found in nearby lots.  The Bear Necessities team store sits on the main level of the arena and is open during regular hours, and features a great selection of Maine apparel and items, all in a setting that is essentially a hall of fame and museum paying tribute to Black Bears sports, especially hockey.  On game day students walk across campus and line up a couple hours before game time to secure their seats, and this Sunday evening game had a good crowd on hand.  A ticket in one of the upper rows was secured for $26 ($6 of which was fees even when purchasing directly from the box office in the arena's main lobby).  We still stand by the statement that Division 1 college hockey is overpriced in New England, but folks seem happy to pay the price and the product is usually very entertaining.  The odd shape and design of the building seems to emit a sense of character and history when approaching the arena from the outside.  This is certainly a departure from many of today's cookie-cutter venues, and the shape and styling of the arena seem to be synonymous with the Black Bears hockey program, as if the arena and the team are always spoken of in the same sentence.

Once inside the main entrance of Alfond Arena you are on the main concourse which runs underneath the large grandstand which sits on each side.  A Maine Hockey Hall of Fame sits near the box office entrance, and the entire concourse hallway under the lobby side grandstand is made up of the Bear Necessities store, but also have memorabilia all over the place, including photos of past Black Bears who made the NHL, retired jerseys of past players including Paul Kariya, and a jersey with a Shamrock paying tribute to the late Shawn Walsh.  NCAA championship trophies are also on display, and this area of the arena oozes with history and reminders of the great teams of the past.  Entry into the arena bowl is via the corners of the rink, and there is an aisle running in front of the upper grandstand on each side.  Seating is made up of 8 rows of navy blue plastic seats below the aisle, and then an upper grandstand which extends up another 16 rows, of which the front 4 rows also have plastic chairs and the rest well worn plastic bleacher benches.  The end seating also has about 4 rows of seats underneath the balcony, which appears to have been shoe-horned in to jam as many seats as possible into the building, and is the designated student section.  As with all good student sections, this area sits behind, and almost hangs over, the net defended by the visiting goalie for 2 periods.  The end opposite the student section is made up of 2 tiers of luxury boxes, and there is a small amount of bench seating down low in the corners as well.  The capacity is listed at 5124, and the arena feels quite crowded when nearly full, as the overall size of the building is not that big, but seats are located in nearly every place possible to maximize capacity.  The immediately noticeable feature of Alfond Arena, just as it is on the outside, is the roof and ceiling configuration.  From the inside the ceiling is a focal point, and the many peaks and eaves give a unique look to the building.  The roof trusses are wood, and the ceiling is sprayed with white foam insulation.  The ceiling above the ice surface is wooden, and if you look closely you will see a large goal horn hanging from the rafters as well.  A video board hangs high above the ice surface at center ice, adding a modern touch to the otherwise throwback feel of the arena.  A few different food concessions are scattered around the building, most offering the usual arena fare, although Papa Johns pizza slices and a stand selling ribs and pulled pork were also in the mix.  The structure and layout of Alfond Arena are certainly different, odd, and somewhat intriguing to first time visitors.  The building itself seems to carry a sense of history and a feeling that this place is special, and is indeed a home, not just a structure where the Black Bears play.

Despite the cool architecture and unique design of Alfond Arena it is the game day experience that really sets this place apart from many college hockey venues, and establishes this as a must-see arena.  They do things right at Alfond Arena, and the fans are very supportive, despite the team not being very good in recent years.  This game pitted the Black Bears against powerhouse UMass-Lowell, and was a lopsided affair with Maine giving up a goal 2 minutes in, being behind 4-0 at the first intermission, and ultimately being shut out 6-0.  As games go, it was not very entertaining, and the 4000 folks on hand had little to cheer about.  The spectacle of the game and energy in the building, however, was something worth experiencing, at least early in the game.  The student section is raucous, loud, and intimidating to opponents.  Goalie heckles are mastered here, and the band plays a huge part in the game.  The band actually marches into the arena playing a tune while streaming across the concourse, up the steep stairs, and taking their place above the visiting goalie.  Once there they play nonstop throughout the game as the only music heard during the game after warmups is from the band.  There are no piped-in arena rock anthems or dance tunes.  All of the energy and noise takes place in a setting that is clearly geared toward supporting the home team, all while 2 NCAA championship banners hang from the rafters.  Things do get a bit commercialized as ads are played on the video board and there are sponsor announcements frequently thrown into the mix, but overall it is an old school presentation. Intermission features fan contests and the usual fanfare, but folks are here for the hockey and this is a knowledgeable crowd.  Despite the UMass-Lowell shutout we did get to hear the goal horn which is very loud, as Maine did put the puck in the net, but the goal was waved off, adding to the sense of frustration by the local fans.  Many fans did head for the exits after the second period as the outcome was not in doubt and this was a Sunday evening game, but overall the fans are hearty, vocal, supportive, and intense here.  It is not often that an arena features such a unique architectural design and lives up the the high expectations one gets at first view from the outside.  Alfond Arena is simply a box (albeit a geometrically complex one) full of energy, history, and flair that happens to house one of the most storied college hockey programs in America, and the raucous students and faithful band that define what the college hockey fan experience should be.  Whether the Black Bears return to their dominant form like they had in the 1990's under Shawn Walsh or not, this is a great venue to enjoy hockey, and truly is a part of Maine culture. 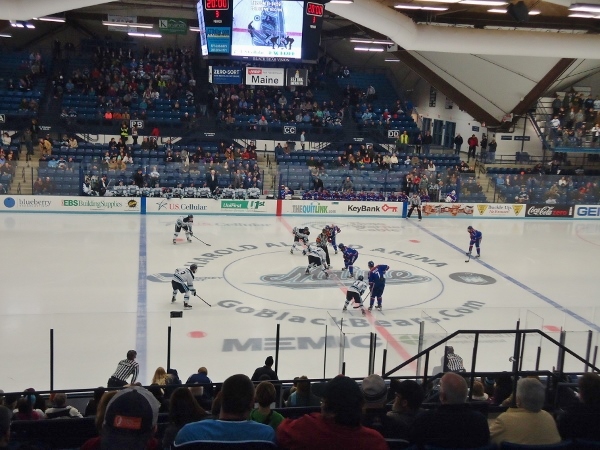 Other information about Maine Black Bears hockey can be found at:  Maine hockey home

Other information about Harold Alfond Sports Arena can be found at: Arena home