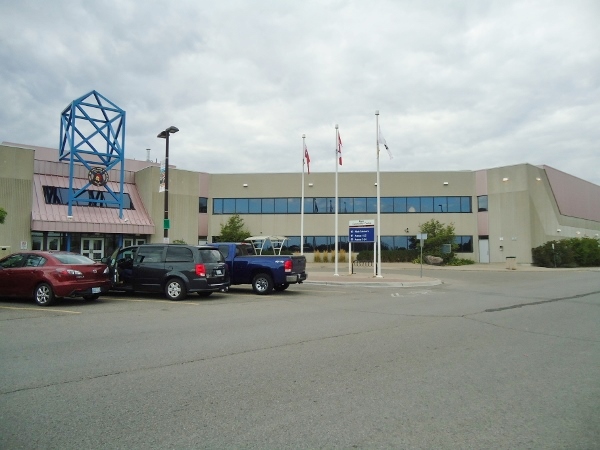 Preseason hockey can often be thought of as unimportant, or meaningless.  For the players taking the ice to try to firm up a spot on the roster the games are very meaningful.  Preseason also gives fans a chance to watch some high level hockey at places that they may not otherwise get the chance to attend.  The OHL's Generals certainly have a grand history, and also have a recent Memorial Cup to their name.  Seeing the team play at this tiny barn was a treat.  Ajax is a couple towns to the west of Oshawa, and this suburban city has had teams of its own competing at the Junior A level, with the Ajax Attack dissolving when the OJHL reduced in size a few years back.  The Ajax Community Centre opened in 1967 as a single pad facility, but expanded into its current configuration of 4 ice pads in 1991.  The sprawling venue sits across from a town park and next to a hospital. In addition to the ice rinks there are other recreational facilities on site as you would expect at a venue such as this.  The arena has an older look about it, with gray and tan concrete topped by a faded red metal roof. The roof is flat, and the main entrance has a metal awning and an odd metal tower of sorts made out of blue metal beams. There are parking lots adjacent as well as on street parking.  The building has an appearance of being older than the 1991 renovation, and almost has the appearance of 1970's venues.  Although the Generals were the home team for this game it was neat seeing the sharply lettered buses of both the Gens and Kingston Frontenacs parked next to each other in the parking lot.  Ajax is thought of as more of a bedroom community for Toronto than a destination of its own, but folks seemed happy to have this game in town, and a large crowd was on hand.  Many fans in attendance were from right in Ajax, whereas quite a few people also made the drive 15 minutes away from the General Motors Centre that the Generals normally call home.  The Ajax Community Centre, and the ice pads within its walls, serves the community nicely as a recreational venue, and will continue to do so into the future.

Once inside the main entrance to the Ajax Community Centre you find yourself in the large multi-level lobby.  There is an information desk inside the door and the venue's main food concession stand is in the lobby as well.  Oddly, there are a lot of plants in the lobby, making for a seemingly out of place tropical look.  For this exhibition game the Generals set up a ticket and merchandise table in the upper lobby, which can be accessed via a stairway or elevator.  Tickets for this game were $14, which seemed a bit high for preseason hockey, but fans didn't seem to mind as there were quite a few more fans on hand than there were seats in the arena.  The main arena, known as rink #1, has seating for 450 fans.  Like many arenas that were built recently (despite not being built recently) the seating is above the dressing rooms, with the front row 12 feet above ice level.  Five rows of plastic chairs make up the entirety of the seating, with the center sections being blue, and the sections on the ends being red.  Above the seating is a hallway which allows access to the seats, and with a crowd of over 650 on hand, many folks chose to stand in the hallway and look through the glass to watch the game.  Additional fans found a spot to watch the game where they could, with folks standing along the dasher boards on both ends to watch the action.  The arena has a low ceiling, and there is a single scoreclock on one end of the arena.  Protective netting covers the entire seating area.  The walls are a bare concrete, and the ceiling has silver insulation panels covering the entire ceiling.  Team benches and penalty boxes are across the ice from the grandstand.  There was a room in the corner overlooking the ice which was used as a media and scout room for this game.  The arena is very spartan, with bare bones amenities.  The Ajax Community Centre is certainly not an OHL calibre building.  It does not claim to be however, and would make a suitable home for a Junior A team, as it did when the Attack played here.

You never know what to expect from the gameday presentation and atmosphere when it comes to an alternate venue game, especially a preseason one.  The Generals staff did a good job making the Ajax Community Centre feel like a temporary home.  The team mascot was on hand.  They were selling merchandise and season tickets in the lobby.  There were also tables set up by local restaurants and even a bake sale going on in the lobby.  The standing room only crowd was there for the game primarily though, and the on-ice action was the centerpiece.  Nothing took place at intermission, and fans chose to walk around the lobby to warm up a bit during that time.  The arena itself is rather unwelcoming and cold (in an uninviting way, in addition to the temperature).  The drab appearance of the arena is not very exciting, but it was still fun to see such high quality hockey in such a small venue.  It was also neat to see the NHL scouts stand together high in the corner during warmups.  This was indeed big time hockey.  The game was rather entertaining and the fans on hand enjoyed themselves, but Kingston took a 5-2 win over the Generals.  There were a couple of good fights to keep the fans entertained as well.  The Ajax Community Centre is a rather utilitarian building which certainly serves it purpose of providing a recreational venue for city residents.  It is not a place that would be considered a great spectator venue, but that is alright, and the fact that local fans were able to enjoy the OHL for an evening in this setting is a good thing.  You never know if a junior hockey team will ever return to this venue, as the junior hockey is rather crowded in the Greater Toronto area, but it was certainly a fun experience to be able to attend a game at this building for a one-off game.  Similar community venues dot the landscape across Canada, and when one of these places that is seemingly off of the big-time hockey radar gets a chance to be called into action it makes for a special experience. Other information about the Oshawa Generals can be found at: Generals Home

More photos of Ajax Community Centre can be found  Here